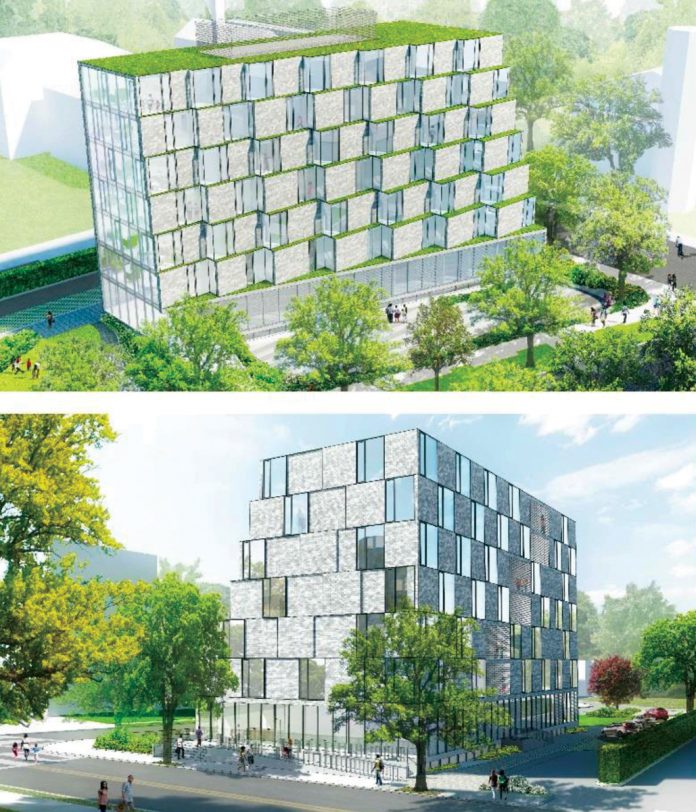 “It looks more like a boutique hotel than a homeless shelter,” remarked Robert Hall, president of Capitol Park IV Condominiums, the townhouse community immediately adjacent to a short-term family housing (STFH) facility planned for 850 Delaware Ave. SW. The site, home of Unity Health Care’s Southwest Clinic, is bordered by grassy federal reservation 220 to the north, Delaware Avenue to the west, I Street to the south, and Telesis Corporation’s Randall School Project on the east. Owned by the city, it is zoned R-4, which restricts structural height to 40 feet and lot occupancy to 40 percent.

Hall had been a persistent critic of Mayor Muriel Bowser’s decision to locate the family shelter in Southwest, threatening repeatedly last winter to sue the city over the scheme. His unexpected reversal was the result of a campaign of civic engagement led by Ward 6 Councilmember Charles Allen and top members of the Bowser administration.

Engaging the Community
When opposition surfaced to the original plan to place the facility adjacent to Blind Whino off I Street SW, the DC Council briefly considered an alternative in Northwest. However, after discussions with the mayor, it decided that placing a facility on that parcel would take many years and might be subject to litigation. It therefore reconsidered the 850 Delaware Ave. location, previously suggested by community members and endorsed by Advisory Neighborhood Commission (ANC) 6D. At the behest of Allen, it was incorporated into the “Homeward DC Omnibus Approval of Facilities for Short-term Housing for Persons Experiencing Homelessness Act,” passed by the DC Council on May 31, 2016.

In meetings on Sept. 22, Oct. 18, and Nov. 29 (minutes available online) the team framed guidelines for the design of the STFH:

“I appreciate the thoughtful work and genuine engagement of your neighbors,” stated Councilmember Allen, describing the work of W6CAT. “It would be a mistake to underestimate the compassion and commitment of Southwest.”

The New Design
The city unveiled STSA’s proposed design at a Dec. 15 community meeting at Westminster Presbyterian Church in Southwest. It is a seven-story ziggurat oriented north-south on the footprint of the existing Unity Clinic. The configuration preserves the tree canopy and viewshed. “We wanted a facility that joined with and into the community,” stated the architects at the meeting.

The first-floor lobby opens to the building’s northern side. In addition, this level contains a dining area, offices, and computer-training and conference rooms. There are two elevators. Each residential floor has its own 450 square-foot, outdoor play space, a community room, laundry facilities, central microwave, and sink. The community rooms, situated on the northern side and walled with glass, provide a view of the Capitol.

The new health clinic will be housed below grade with a first-floor entrance on I Street.

The city estimates the cost at $12 million. It will ask for support from ANC 6D at a Jan. 9 meeting.

The project does require zoning relief, and the city will submit an application to the Board of Zoning Adjustment in January in advance of a March hearing. It plans to apply for permits in June to begin construction in November. In the meantime, W6CAT will frame a Good Neighbor Agreement to be signed by the city, the ANC, and the facility’s future operator before the facility opens in summer 2017.

Hall thanked the DC administration and Councilmember Allen at the Dec. 15 meeting. “We did not want an institutional building,” he said, speaking for the community. Its attractive design will fit in animating the surrounding area, he stated.

“When you bring Southwest to the table you end up with a great project,” commented ANC 6D Chair Litsky. “The collaboration was extraordinary.”

Free Tax Help at East of the River Libraries