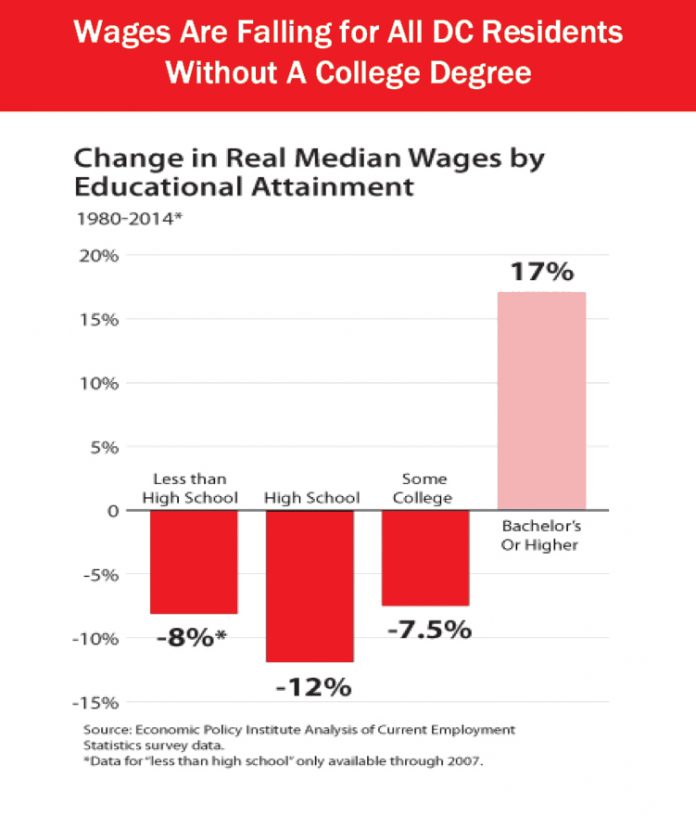 Donald Trump famously campaigned on promises to “make America great again” by fighting for working people. Yet his nominee for Secretary of Labor, Andrew Puzder, has a long history of fighting against workers’ rights, both at his own companies and from a policy standpoint. He is the wrong choice for Labor Secretary. Puzder’s nomination would be confirmation that the District needs to continue charting its own path to helping workers, especially the least powerful. That includes a strong minimum wage, paid family and medical leave, and protections against workplace abuses.

Puzder’s Awful Record as an Employer
The US Department of Labor’s mission is to “foster, promote, and develop the welfare of the wage earners, job seekers, and retirees of the United States; improve working conditions; advance opportunities for profitable employment; and assure work-related benefits and rights.” Puzder’s own record on these issues has been the exact opposite. His actions and policies have served to undermine workplace standards, rights, and benefits.

Puzder has voiced opposition to raising the minimum wage, providing paid sick leave to employees, and expanding overtime rules. He has expressed almost overt disdain for lower-wage work, stating that replacing workers with automation makes sense because machines are “always polite, they always upsell, they never take a vacation, they never show up late, there’s never a slip-and-fall, or an age, sex, or race discrimination case.”

Yet perhaps most telling are the abuses of workers’ rights at Puzder’s own companies. Department of Labor investigations uncovered violations of the Fair Labor Standards Act at 60 percent of Carl’s Jr. restaurants (whose parent company, CKE, is owned by Puzder) over the last seven years. Two-thirds of women working at CKE restaurants have experienced unwanted sexual behaviors at work, according to a survey by Restaurant Opportunities Center United, a membership group of restaurant workers and supporters. One-third faced situations where they were not fully paid – “wage theft” – including not receiving required breaks or overtime pay. And 79 percent reported preparing food while sick.

Since 2000, when Puzder became CEO of CKE, Carl’s Jr. and Hardee’s have been served with more employment discriminations lawsuits than any other hamburger chain in the country. The lawsuits include allegations of racial and gender discrimination, as well as sexual harassment.

When asked about disrespectful depictions of women in Carl’s Jr. and Hardee’s advertising, Puzder was unapologetic, stating, “I like beautiful women eating burgers in bikinis. I think it’s very American.” A company release claimed, “We believe in putting hot models in our commercials, because ugly ones don’t sell burgers.”

DC Should Continue Taking the High Road
In recent years the District of Columbia has passed laws and policies to protect and advance workers’ rights and benefits, including many of those opposed by Puzder, such as providing paid sick and safe leave, increasing the minimum wage, expanding wage-theft prevention, and providing paid family and medical leave. These policies will help to better the lives of tens of thousands of lower-income DC residents. They are likely to come with little or no drag on the DC economy, as years of research on these policies has found.

Yet more needs to be done to serve the city’s most vulnerable. Income inequality in the District of Columbia is among the highest in the nation and continues to grow. In a booming economy, average income for the poorest DC residents actually fell to $9,300 in 2014, from $10,800 in 2007. Since 1980 wages have fallen, adjusting for inflation, for DC workers with less than a bachelor’s degree, while increasing for those with the most advanced education. Meanwhile the cost of living continues to rise, making it harder and harder for families to make ends meet.

While the District of Columbia has been a leader in providing stronger workers’ rights and benefits, Department of Labor rules and regulations are still important to residents. For example, former President Obama’s proposed overtime rule would have boosted the pay of some 29,000 working DC residents, nearly one-quarter of the city’s total salaried workforce. Puzder has been publicly critical of the overtime rule, stating that “it will be another barrier to the middle class rather than a springboard.”

We need a Labor Secretary who will push for policies that advance the mission of the Department of Labor and put working Americans first. Puzder is not that person.

Getting the Lead Out