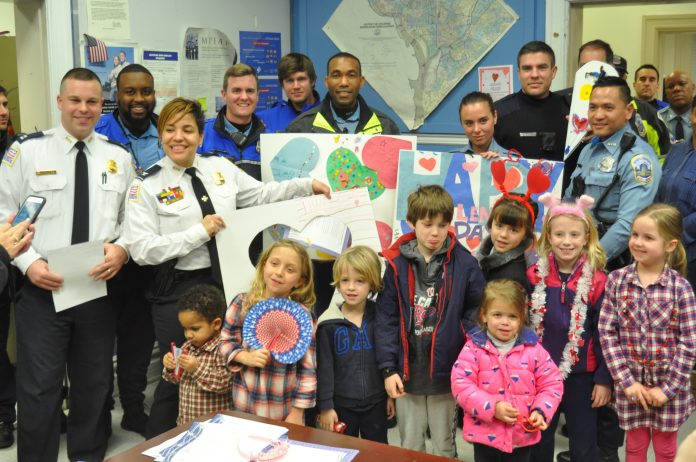 By “That’s me!” yelped Officer David Naples. The occasion was the 18th Annual Police Valentine Tribute. They and other police officers at the First District Sub-station in SE were hooting and laughing at hearing their names in a song in their honor. The tribute is a favorite tradition of 1D1 officers. Each February, members of Capitol Hill United Methodist Church and Ebenezer United Methodist Church join with other community leaders to thank their neighborhood police for dedicated service to the community.

Besides hearing themselves extolled in song, the officers get a kick out of receiving valentines from church kids and having heart stickers and gag gifts put on them. They also receive hot food, on-the-go snacks, and Joanne Buford’s homemade soup. “Ms. Buford’s soup is legendary,” said Assistant Chief Diane Groomes, a veteran guest and honoree of the event.

Capitol Hill UMC’s Sarah Price led the kids in presenting their giant valentines to the police. Then Price and other parents helped them adorn the officers with heart leis, head hearts, flag fans and other regalia.

The lighthearted event belies the more serious purpose behind the festivities. Other American cities have convulsed with tense exchanges between citizens and law enforcement. Many Capitol Hill residents hope their city can avoid that fate by deepening connections between residents and police.

A new honoree this year was First District Commander Morgan C. Kane, who assumed that post in August. On the job for 18 years, Commander Kane began her career patrolling the streets of the First District, which encompasses all of Capitol Hill. A song congratulating her on her new appointment, “Happy Days for Commander Kane,” was sung to the tune of “Happy Days Are Here Again.” Knowing there would be other children present, the Commander brought her two-year-old son, Cooper. “This was my first time experiencing the tribute for our hard-working officers here in 1D, and it was beautiful,” said Kane. “It warmed my heart to see our citizens honoring our officers this way. And my son really enjoyed it as well,” she added.

Another new honoree was the new head of 1D1, Captain John Knutsen. Church members chanted a cheer in his honor, forgiving the New York native for, among other things, being a lifelong Giants fan. “I feel so honored to have been a part of this event. It exceeded any expectations I had. The level of effort and personalization was amazing. This event is a great affirmation of the community support for our officers,” said Knutsen.

Attending from Council member Charles Allen’s office was his Chief Counsel, Nicole Opkins, also a fan of the event. This year she brought her seven-year-old daughter Tara. “Tara and I were proud to join our neighbors in recognizing the dedicated and hard-working men and women of the 1D1 – and police officers everywhere. Capitol Hill UMC always does a great job of putting together this festive event,” said Opkins.

After the big group song, entitled “Keepers of the Peace,” featuring double solos, pulsating Adele music and a 30-person chorus, Capt. Knutsen said, “I hadn’t expected anything like this. Wow.” First-timers Mary Louise Powell and Willie Reyes Ortiz said through grins: “How fun was that! Count us in for next year. We wouldn’t miss it,” said Powell.

As residents poured out, the next shift of officers arrived. CHUMC member Joanne Buford, arriving late, was received like royalty. She personally served her famous soup. “I put some extra aside for Asst. Chief Groomes,” she said. Meanwhile, the church folk, still humming songs they knew would be intractable earworms, were already thinking ahead to next year. 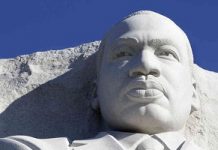