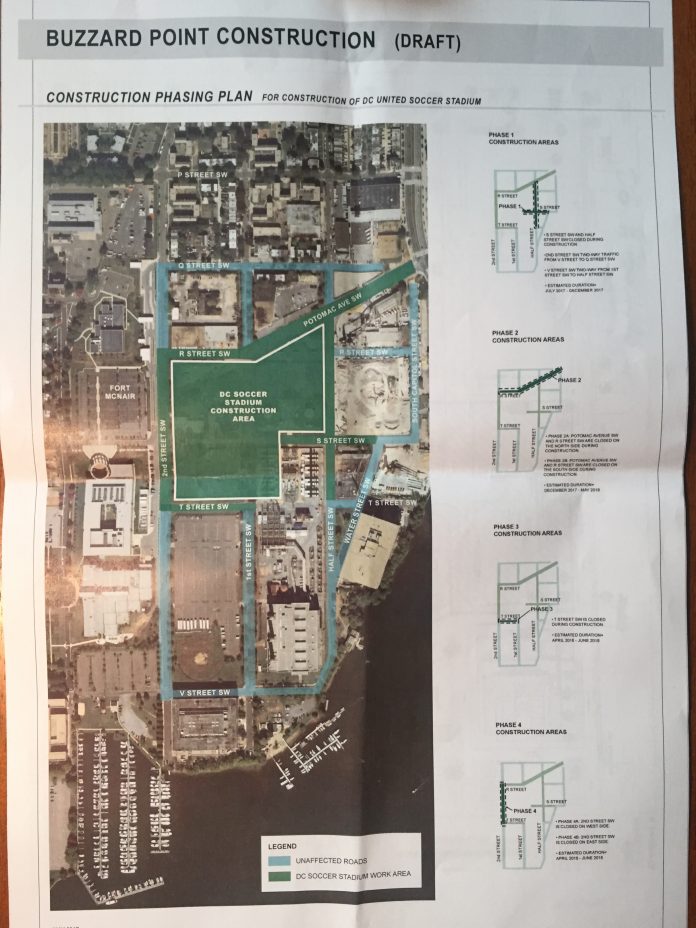 City Reports on the DC United Stadium
Cassidy Mullen is the project manager for the DC United Stadium for the DC Department of General Services (DGS). His agency is responsible for the site’s rehab and preparation for construction, which he stated they would be finished by next July. All the streets in the area bounded by Q, V, Water, and South Capitol streets SW are being rehabilitated curb to curb. Second Street will be reconfigured from one- to two-way during the construction.

Chair Litsky asked how DGS will prevent construction vehicles from cutting through the neighborhood. DGS will post signage prohibiting trucks and will ban violators. The construction will also not block the marina, Mullen added. Traffic to N and S streets will not be blocked.

Commissioner Hamilton requested air-quality monitoring during the construction. DGS will also minimize ponding and pooling to reduce the threat of mosquitoes and West Nile, Mullen stated.

The Wharf Update
Representatives of The Wharf reported that an affordable housing lottery will be held on June 22. The Bozzuto Group is handling the mechanics and the leasing of The Wharf apartments. It has reached out to more than 50 organizations and held meetings in Wards 6, 7, and 8. More than 2,000 people have signed up. Section 8 vouches will be accepted. The office is located at 690 Water St. SW.

There are a little over 200 affordable units for rent. Bozzuto will assign a ranked list of five families to each. If none qualifies, Bozzuto will draw additional applicants from the lottery pool. Applicants’ income will be recertified annually. If it does not increase more than 140 percent, they can remain.

The Wharf is 60 days out from the delivery of the first apartments and the parking garage. The first office tenants will move in during September. The grand opening is still scheduled for Oct. 12. The Foo Fighters will be the first performers at the Anthem that evening.

Chair Litsky complained about the traffic problems at the Southwest Fish Market near 12th Street SW due to illegal parking, describing the situation as “perilous.” The Wharf has reached out to the DC Department of Transportation (DDOT) with a plan to use signage and flexible bollards to channelize the traffic on Maine Avenue. It is also reorganizing the parking for the tour buses servicing the cruise ships during Stage 2 construction.

The Wharf is building a new trash facility for the Fish Market under the highway bridge. It is also erecting four more buildings on the land side that will be completed by April 2018. Virgo Fish Cleaning Service will not be returning. The owner will be the operator of a soda fountain in the rebuilt market.

Commissioner Fast complained about the noise generated by trucks running over a plate located at Seventh Street and Maine Avenue SW. She also asked the workers be encouraged to use the new parking garage rather than the neighborhood streets.

ABC Matters
Many new establishments planned for The Wharf sought the endorsement of liquor applications. The commissioners unanimously supported the following licenses:

A summer garden is an outdoor seating area that is situated on an establishment’s property.

Five commissioners supported the application of Canopy by Hilton, 975 Seventh St. SW, for a hotel license with an entertainment endorsement and a summer garden. Commissioners Fast and Collins abstained.

The commissioners voted 5-1-1 to support the application by Dacha, 79 Potomac Ave. SE, for a CT license with a summer garden. Commissioner Fast voted no, while Commissioner Collins abstained.

Hanks on The Wharf, 701 Wharf St. SW, asked support for its application for a CR license with a summer garden. Chair Litsky and several members of the live-aboard community in the audience objected to the establishment’s proposed hours of the summer garden, because of its close location to slipholders. Litsky asked those representing Hanks to step outside the meeting with ABC Committee Chair Coralee Farlee and come back with a revised proposal. They returned later in the meeting. Farlee reported that they had not reached an agreement. The commissioners then voted unanimously to protest the restaurant’s application.

555 E St. SW
A representative from City Partners, developers of 555 E St., the parcel that contains the old Southwest Fire Station, requested a letter of support for an application for funding from the Housing Production Trust Fund. City Partners has proposed a 196-unit apartment building and a boutique hotel, with 30 percent of the residential component affordable, 25 of these units being at 30 percent of area median income (AMI) and the remainder at 50 percent.

The developer intends to mix both income and age of residents; 58 of the units will be senior housing. It is working with Waterfront Village to plan the accommodations. Commissioner Fascett requested the developer install an ADA-compliant ramp. There will be ample parking for visitors in the basement garage to allow families to visit elderly residents. In addition to the project’s residential component, it features 12,000 square feet of neighborhood-serving retail and restaurants.

The commissioners voted unanimously to support the project.

Other Matters
Commissioner Hamilton gave an update on the situation at Altus Development’s negotiations with the immediate neighbors surrounding its development at 1319 South Capitol St. SW. One of the four developers has been bought out, she said. The remaining three are working on a community agreement.

A resident testified to the deplorable condition of the sidewalks on Fourth Street SW between M and P streets. He also asked the commission to request the prohibition of illegal U-turns on those blocks. He pointed out the hazard to the elderly represented by the temporary steel plates placed in the intersection at Fourth and M streets SW after utility work. Chair Litsky promised to send a letter to DDOT requesting the situation be remedied.