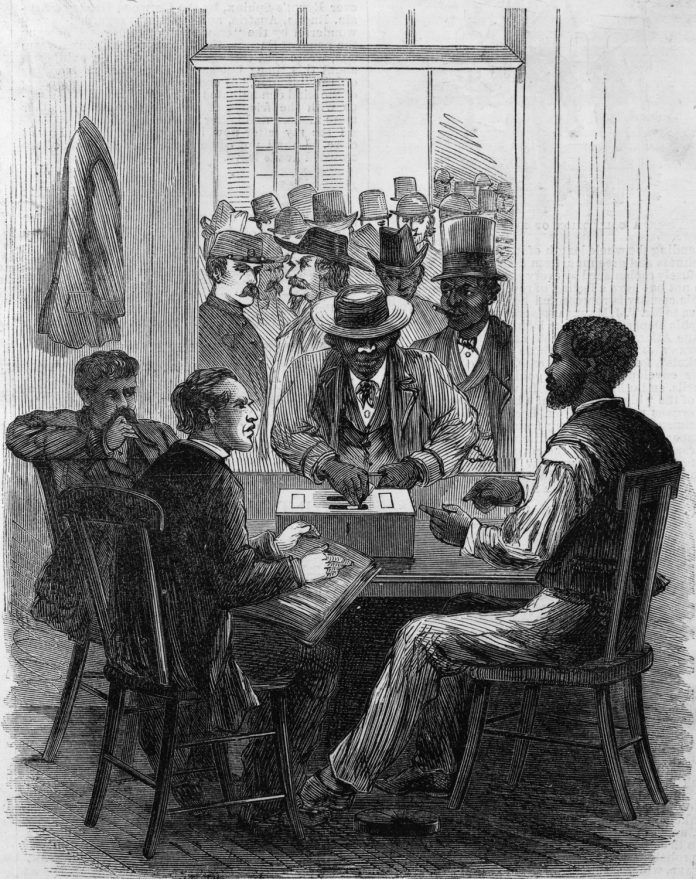 Americans are fixated on the Civil War – its battles, soldiers, monuments and legacies. The war’s 150th anniversary has come and gone, but the books, documentaries and news articles continue apace.

What came after the war, however, gets remarkably little attention. The National Park Service has yet to open its first site on Reconstruction, and few pundits, politicians or filmmakers seem to notice the era’s sesquicentennial milestones. Yet the battles of Reconstruction, even more than those of the Civil War, resonate to this day as Americans fought over fundamental ideas about race, equality, federalism and the meaning of freedom.

Reconstruction was a time of revolutionary change, with the very creation of modern American citizenship through the 14th Amendment, the founding of Southern public schools and colleges and the establishment of the post-emancipation black community – some four million souls entering the realm of legal personhood.

Perhaps no change had more impact (then or now) than black voting, which led to an unprecedented, if short-lived, flowering of interracial democracy. And that revolution began 150 years ago in the District of Columbia, which became (in the words of one critic) “an experimental garden for radical plants.”

Though many outsiders describe the District today as a rarefied reserve for government insiders, set off from and alien to the rest of the country, the District’s unique governance structure makes it, in fact, an exaggerated expression of American democracy. Subject to the whims of its congressional overseers, the city is uniquely susceptible to national political currents.

By the end of the war in 1865, those currents flowed toward black political empowerment as the war itself, and the crucial role that black soldiers played in helping to win it, catalyzed supporters of black suffrage. Just as it had been three years earlier with emancipation, Washington became the focal point of a national effort to win the vote for black men.

The petition found a receptive audience among Radical Republicans as well as a growing number of moderate Republicans. While some Radicals such as Charles Sumner and Thaddeus Stevens genuinely believed in black political equality, strategically minded Republicans recognized that black voting was key to maintaining political power and implementing the Republican vision of postwar Reconstruction.

The issue also touched an emotional chord. Indiana Representative George Julian argued that black men should be granted the right to vote, not just “as a matter of justice to them” but also “as a matter of retributive justice to the slaveholders and rebels.” In DC, a city then run by white Democrats with southern sympathies, Congress had “the power to punish by ballot, and there will be a beautiful poetic justice in the exercise of this power.”

Republicans made the DC suffrage bill a top priority – it was H.R. 1, the first piece of legislation that the House considered when the 39th Congress convened in December 1865. As with emancipation, Radicals hoped to use Washington as a testing ground for black men’s suffrage, which they planned to implement across the South. The bill “completes Emancipation by Enfranchisement” and would “set an example to the whole country,” Sen. Sumner said. “It becomes a pillar of fire to illumine the footsteps of millions.”

Most white Washingtonians reacted with alarm bordering on hysteria. In a late 1865 referendum, only 35 voters in Washington City supported black suffrage, while 6,591 opposed the idea; in Georgetown, the vote was 712-1 against. “This District has been experimented upon in various forms of legislation, odious to the citizens,” and now Radicals sought “to force negro equality upon the unwilling people of the District of Columbia,” wrote the editors of the city’s most prominent newspaper, the National Intelligencer.

Despite such opposition, the House passed the black men’s suffrage bill in January 1866, and the Senate followed in December. President Andrew Johnson promptly vetoed it, but Congress overrode the veto on January 8, 1867. The bill went into immediate effect. What had been unthinkable a half decade before had become the law of the nation’s capital and soon would become the law of the land.

Black Washingtonians organized political clubs and joined the interracial Central Republican Association to mobilize and register new black voters. To the chagrin of white conservatives, the black elite – educated, prosperous, native to the city – joined forces with formerly enslaved people in supporting the Republican Party. Their organizing efforts were remarkably successful. Despite being only 30 percent of the population, by election time black men were nearly 50 percent of registered voters.

Black men in Georgetown had the first chance to flex their political muscle. In February 1867 they ousted incumbent Mayor Henry Addison, who had complained about “nigger voting” and had long been a scourge of the black community.

Washington City’s black voters got their turn that June. Starting at 2 a.m. on Election Day, black buglers marched through the streets reminding folks to vote. Black Washingtonians came out in force, and their votes wrought significant change. Republicans, who had played only a marginal role in local politics before 1867, won a majority of seats on both the Board of Aldermen and the Common Council. The next year, black voters helped elect white abolitionist Sayles Bowen to the mayor’s office, along with the city’s first black elected officials: Alderman John F. Cook Jr. and Councilman Carter A. Stewart. A new political day had dawned.

In the years ahead, DC’s black voters raised to power a biracial government that provided jobs to a burgeoning black middle class, implemented massive public works projects, gave black men the right to serve on juries and supported the expansion of the nation’s best black public school system. They also passed anti-discrimination legislation that later provided the legal foundation for DC’s post-World War II civil rights movement. It was “quite a revolution,” the Evening Star conceded.

Perhaps no one embodied the promise of the new era more than George Hatton.

Born enslaved in Prince George’s County, Hatton gained his freedom in April 1862 and a year later was among the first black men to sign up for military service with the US Colored Troops.

A stocky five feet six, Hatton had a powerful voice, a winsome speaking style and a distinctive limp after suffering a gunshot wound to his knee at the Battle of Petersburg. He returned to Washington in 1864 ready to assert his rights as a combat veteran and full citizen. He joined the Republican Party and waded into political battles over suffrage, integrated schools and labor rights. Within five years, the 27-year-old former slave was elected to the city’s Common Council.

Yet for all the accomplishments of the immediate postwar period, biracial democracy in the District was still a fledgling endeavor vulnerable to changes in economic conditions, national politics and powerful personalities. A counter-revolution percolated below the surface of DC politics as white supremacists organized in opposition to Radical rule, clashed with their Republican opponents and challenged the basic premise of self-government.

Led by businessman Alexander Shepherd, who rejected all democracy, biracial or otherwise, white conservatives convinced Congress in 1871 to establish a “territorial” government that limited voter influence and consolidated power in a Board of Public Works run by Shepherd himself. When the profligate board ran afoul of the city’s congressional overseers, Congress, newly swelled with Democrats intent on overturning Reconstruction, rendered a swift and painful judgment in June 1874. It stripped all District men, white and black, of the right to vote and imposed a presidentially appointed board of three commissioners to manage the city. District voters would not cast another meaningful ballot for nearly a century.

Congress’s two-step retreat from democracy in the District – first by limiting voter influence in the territorial government, then abolishing elected offices altogether – was a precursor to the national Republican retreat from Reconstruction across the South. Three years after Congress passed the DC disfranchisement bill, legislators gathered at the Wormley House at the corner of 15th and H streets NW to broker the deal that ended Reconstruction. Within a generation, bills limiting voting rights had passed every Southern state legislature.

The Republican Party, no longer interested in defending its civil rights agenda, instead followed Alexander Shepherd’s model of promoting economic development for the benefit of white elites. In Washington this meant downplaying or ignoring the interests of the black community and focusing on economic growth to build a grand capital “worthy of the name.” Development had triumphed over democracy – and not for the last time.

To justify their actions, the advocates of disfranchisement created a fantastical story of Reconstruction. “The taxpayers were completely swamped” by newly arrived former slaves, wrote the Evening Star, and scheming “Murder Bay politicians” – shorthand for Radical Republicans – took advantage of them and plundered city coffers.

This dubious interpretation quickly hardened into incontrovertible truth among white Washingtonians, even though the infamous territorial legislature had only two black members and white appointees on the Board of Public Works had committed the worst abuses.

Today Americans are less inclined to defame Reconstruction than they are to ignore it. Anxious to avoid the thorny issues of race, power and equality that were at the heart of that grand experiment in biracial democracy – issues that divide us to this day – we focus instead on the mechanics of the war itself.

Speaking at the 1877 Dedication Day ceremonies in New York, as the last federal troops left the South, DC resident and elder statesman Frederick Douglass bemoaned Americans’ growing tendency to focus on the battlefield “bravery and skill” of the soldiers. Instead, he insisted, we must see the late war as a “war of ideas, a battle of principles,” principles embodied in the Reconstruction governments. The great orator, who had dedicated his life to the freedom of his race and the enlargement of American democracy, then boarded a train to return to his home in the voteless capital of the United States.

From “Chocolate City: A History of Race and Democracy in the Nation’s Capital.” Copyright © 2017 by Chris Myers Asch and George Derek Musgrove. Used by permission of the University of North Carolina Press, www.uncpress.org.