Beginning in about six years, the cleanest body of water in the DC metropolitan area after a major storm will be the Anacostia River.

How has this come about?  It is a remarkable achievement by a combination of active citizen groups, government agencies, courts of law, science, technology and the luck of the draw.

A Little Sewage History
When engineers in the 19th century were designing the first sewer systems in our cities, they decided that the best way to keep the pipes clean was to combine it with storm water draining off streets. These combined sewers worked fine as new treatment plants were built to handle the mix.  But soon the streets were paved, sidewalks were built and more and more buildings with large roofs were connected to the sewers so that when it rained they became overloaded.

The choice was to let the combined sewage back up into streets and homes, or to install valves and discharge the overload into rivers and streams.  Obviously, the latter quickly became the preferred option.  Digging up all the streets to put in separate storm and sanitary sewers seemed out of the question.  Newer areas and new cities got separated sewers; the storm water went into rivers and streams and the sewage directly to the treatment plant.  But the older cores were left with “combined sewer overflows” or CSO’s.  As time went on, the overflows became more and more frequent until by the 1980’s in DC they averaged once a week.  And each overflow could pour millions of gallons of raw sewage into the Anacostia, the Potomac and Rock Creek.

Demanding a Solution
In the 1990’s environmental groups led by Robert Boone at the Anacostia Watershed Society started threatening litigation if EPA and the City did not figure out a solution.  Folks were particularly angry that the Anacostia was bearing an unfair burden of the overflows, due to a combination of factors – it was the watershed for much of the combined sewer area of the City and it was where poorer neighborhoods were located.

Citing the latter environmental justice factors in particular, the citizen groups were successful in forcing EPA, the City and the Water and Sewer Authority (WASA) into a court-supervised consent decree that resulted in a Long-Term Control Plan.  Under an EPA permit, the Plan was developed from 1998 to 2001, revised after hearings in 2002 and signed in 2005.  It recognized the prohibitive cost of separating the sewers and came up with a plan of deep tunnels, diversion facilities and some sewer replacement with the goal to reduce overflows by over 95 percent by 2025.

The $2.7 billion DC Clean Rivers Project is now in full swing.  Eighteen miles of tunnels larger than Metro’s are being built to store millions of gallons of combined sewer discharges over 100 feet underground until it can be fed into the Blue Plains Treatment Plant once the storm has passed.  This is a proven technology first used in Chicago over 30 years ago.

The first set of DC tunnels, from the west side of the Anacostia River below RFK Stadium to the Blue Plains Sewage Treatment Plant, became operational at the end of March, four years ahead of schedule.  Meanwhile the tunnels to serve the Potomac  were subject to a revision in the Control Plan in 2016, which reduced their capacity somewhat and augmented them with “green infrastructure” (rain gardens, roof gardens, etc.).  A lot of this progress is due to George Hawkins, a long-time environmental leader who recently retired as head of DCWater, as WASA is now known.

The Long Term Control Plan now estimates eventual CSO reductions to be 98 percent in the Anacostia and 96 percent in Rock Creek and the Potomac.  Originally, the Long-Term Control Plan was to be completed by 2025.  Now DCWater and the City will have the Anacostia works in place by 2023 and the work in the Potomac and Rock Creek watersheds by 2030.  The opening of the Anacostia tunnel last month will reduce Anacostia CSO’s by an estimated 81 percent; the remaining 17 percent will come from the Northeast Boundary tunnel and related barriers and sewer construction, a project currently underway.

By comparison, while here in DC we are achieving 96 to 98% reductions, our friends across the Potomac in Virginia are still trying to decide what to do with their sewer overflows. CSO reductions in some other cities are well below what we are planning to achieve:  the goal in Philadephia is 60% and in New York a mere 40%.

Another Problem
But if you are following all these numbers so far, you are asking why I said at the beginning that it will be six years until the Anacostia was the area’s cleanest water body after a storm, while 2023, when all this CSO work is complete, is only five years off.

The answer is that storms create vast “flashes” of runoff to shallow rivers like the Anacostia.  That runoff can stir up the sediments on the bottom.  Because the River served for so long as the location of industries, many of these sediments are contaminated with toxics.

The cleanup of these sediments and the control of other toxic discharges is a separate effort that is under the direction of the DC Department of Energy and the Environment (DOEE).  The City has well underway a process to develop a comprehensive plan to deal with sediments in the water, along the shallows and on nearby contaminated lands.  DOEE has been working with a range of landowners, including the National Park Service, which owns the land under the water.  The Plan of Action for cleaning up the areas will be done this year and calls for completionactions by 2024.  At that point or soon after, the Anacostia should be pretty much swimmable and fishable.  And the best place in the area to find clean water to do both, especially after a storm!

Doing your part
The most helpful actions as homeowners are to slow down storm water from roofs and paved areas and try to keep as much of it on your property as you can.  One key action is to build rain gardens, sunken plots that absorb the rainwater filled with plants that like to be damp, and roof gardens, which do the same.

If you are in the market for plants, the best selection is at the annual Plant Fair fundraiser, held by the Friends of the National Arboretum on the last weekend of April each year.  Volunteers have sought out donated plants from nurseries all over the country, and have been able to obtain a wide selection of annuals, perennials, shrubs and even trees at very low cost.

So you can help a worthy cause, purchase unusual plants at reasonable prices and help the Anacostia achieve first place among the rivers of the region!  This year’s dates at the Arboretum are Saturday and Sunday, April 28 and 29 – Saturday morning is for members of the Friends only – but if you sign up there as a member you get in then.  Bring the kids – there is also a Plant Zoo filled with kangaroo paws, foxgloves, and such! 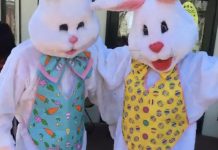