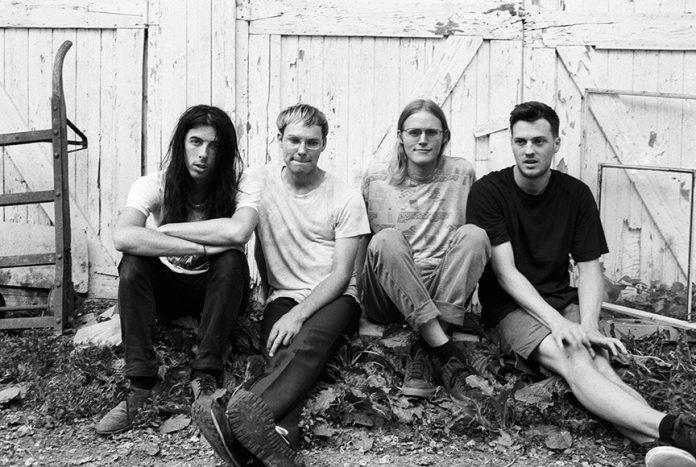 The crowd gathered throughout the evening at DC9 in anticipation for the return of Nap Eyes to the District on April 16. Touring in support of their third album I’m Bad Now, the Halifax indie rock band arrived with a new, aggressive intensity, a welcome change from their signature chilled-out sound.

As the quartet walked on stage, the audience prepared itself for new offerings as well as the masterful refinement of the older material. Nigel Chapman, the band’s lead songwriter, vocalist and guitarist, has a voice that feels simultaneously both immediately familiar and refreshingly distinct. His flat and deadpan style resembles Lou Reed.

First up was “Judgement,” a tune from their latest album. After a simmering build up, lead guitarist Brad Loughead let loose with a noisy, distorted eruption. “Every Time the Feeling,” a head bobbing, power-pop song that takes its cue from classic Jonathan Richman, followed. Chapman sang:

As the show progressed, the band reached back to their 2016 album, Thought Rock Fish Scale, playing “Stargazer” and “Lion in Chains”. Each beautifully dreamy verse mirrored by a repeated, gently weeping guitar refrain.

Traveling farther back in time to “Selfish Dream,” a song not found in the band’s recorded repertoire, the band rocked their hardest. Channeling the spirit of Velvet Underground’s Sister Ray, Chapman and Loughead laid down hard guitar licks with serrated feedback, breaking into searing free form solos.

The band shifted gears on I’m Bad. This almost-title track is a country-rock inclined tune that ends with a guitar solo in the style of Red House Painters’ Mark Kozelek. Stylistically different from anything the band has attempted, written in the second person, Chapman mockingly croons addressing himself:

Nothing gets past you now
‘cos you always see it come
Said if it’s even slower than you
Which is amazing, because you’re so dumb

Nap Eyes live up to their name, playing relaxed, meditative music that lulls one to sleep on a lazy day.

When performing live, however, their energy compliments their poetic style and thoughtful delivery. The band’s cohesiveness on stage belies their distant homes. They have clearly perfected long-distance composition and arrangement. This was clearly appreciated by the enthusiastic crowd at DC9. Counting myself among them, I also am looking forward to the band’s future endeavors.