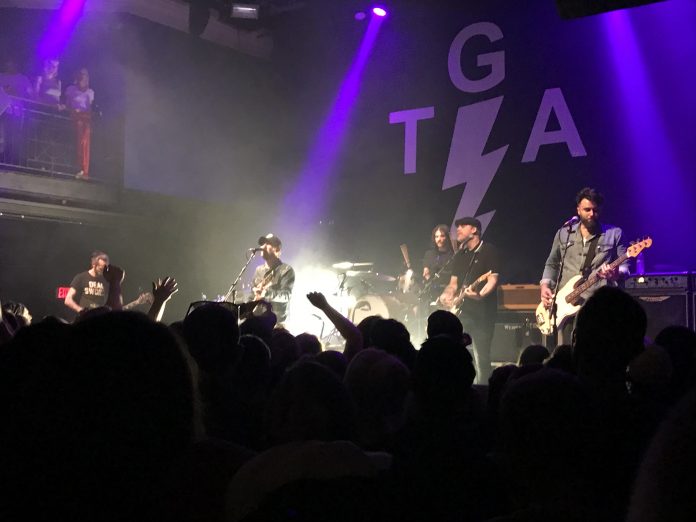 As two or three drunken male bodies hurdled into our midst while another was handed forward over our heads, an elbow slammed into to my ear.

Ok, it wasn’t Saturday, but the oddsof physical injury were increasing.

My partner had expertly exited the floor for the shelter of the bar when the first muscle-bound guy had flung himself into our midst. “It smells like white male privilege in here,” she wryly observed as I joined her. “At least in 80s, you knew it was time to leave when the skinheads showed up.”

While shaven heads and black combat boots have given way to concert tees, skinny jeans and Fitbits, the vibe at the club remained raw.

This was the first night of The Gaslight Anthem’s ’59 Sound Anniversary Tour. With only four US dates, tickets had been instantly snatched up by the band’s true believers, anxious to hear its iconic second album in its entirety. Many had traveled across country

Fallon’s powerful growl melded with the howling of the crowd, all of whom mouthed lyrics in enraptured unison.

The riffs of Alex Rosamilia’s guitar danced around the lines, while the pounding base of Alex Levine’s bass and Benny Horowitz’s drumming drove the crowd’s feet. They were joined by guitarist Ian Perkins, the other half of Fallon’s duo, ‘The Horrible Weather,” playing rhythm.

The band paused to allow Fallon to address their flock. Tonight, they would play the ’59 Sound in its entirety in order, he promised.

After an extended oration on his New Jersey roots and the ubiquitous role of diners in the Garden State’s culture, Fallon, cautioning the audience presciently to take of each other, kicked off “Great Expectations.” The band then ripped through entire the album without a pause.

The task completed, the band’s returned to a mix of its other corpus. A number of tunes from were drawn from “Sink or Swim,” their first album. Performances of “American Slang” and “45” were standouts.

“No Regrets!” read a dozen handmade signs, waived during “Meet Me By The River’s Edge,” a personal favorite.

To the club filled with twenty and thirty somethings, Fallon sang of adolescent angst, social alienation, fast cars, self destruction, tragic death, disappointment and unrequited love. He described the gritty world of blue collar New Jersey in which kids graduate high school, go right into the workforce, marrying early, having kids and remaining in their hometowns. All the while, his supplicants, true whirling dervishes, danced in a frenzy.

A roaring rendition of “We’re Getting a Divorce You Keep the Diner” ended the night. Framed by Rosamilia’s riffs, Fallon sang:

I look to my left and my right
And I’m callin’ out for my brothers, but it’s so dark in this night
Am I alone?

On Sunday night, surrounded by throngs of spirited congregants in the one, true rock ‘n’ roll cathedral, the 930 Club, the answer was a resounding, “No!”