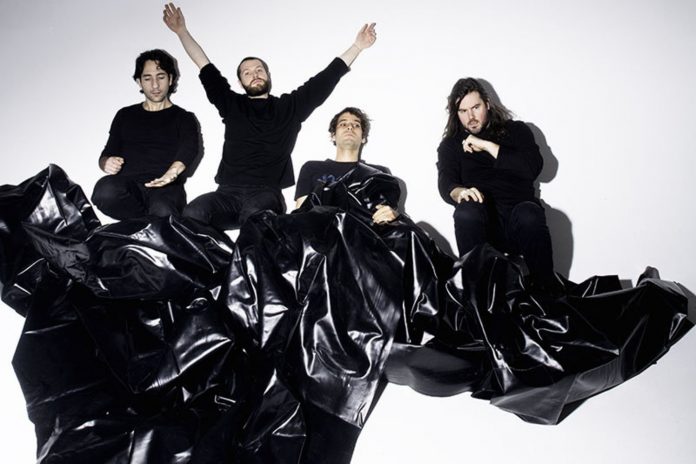 An audience of faithful followers waited patiently for art house rockers Suuns (pronounced “Soons”) to take the stage on May 24th.  The Montreal quartet’s music has always been both tense and uninhibited. The songs from their current album Felt, while being more refined and melodic, are still unsettling. The band demonstrated an ability to create memorable hooks out of unexpected sounds during their concert at Union Stage on May 24.

The set started with “Music Won’t Save You” from their 2013 album Images du Futur. As lead singer Ben Shemie’s slack vocal drifted in and out with each verse, the opening steady beat of synthesizer and drums intensified. This understated melody was the perfect lead into a trio of songs from the new album. They began with “X-ALT,” which picks up the pace with a hypnotic guitar-picking pattern. On “Watch You, Watch Me”, the rat-tat-tat drumbeat overlaid the willowy synths, recalling Kraftwerk. Processed through a vocoder, Shemie’s voice fit perfectly with the overall mood.

Midway through the show, the intensity picked up with “Translate” from 2016’s Hold/Still. This song begins with a simmering build up as Max Henry’s synths entwine beautifully with the guitar. As the crowd bobbed along, Shemie mumbled indistinct vocals:

The show’s most recognizable moment came with “2020.” The song’s descending slide guitar riff that echoes like a falling bomb. This unique sound resonated over the synths and Shemie’s sneering voice. It was a brilliant moment.

Returning to the new album, Suuns played “Control.” Combining a slow burning ballad with sound effects and recorded background conversations, Shemie used a variety of instruments including a wireless keyboard guitar as well as a set of triangles, hitting them together for a meditative effect.

I have seen Suuns two times this year, once at a large festival and now a second time at an intimate club. The band continues to evolve and intrigue. The distinct melodies stand starkly against an atmospheric background layered with abrasive noise.

The level of identifiable detail is unforgettable, allowing listeners to descend further into the soundscape. This is some of the most interesting music of the decade, a blend of skillfulness, confidence and precision that is sure to keep this writer a loyal fan.