Seven is considered a lucky number. Think about it, There are seven seas, seven continents, and seven colors in the rainbow. Snow White ran off with the seven dwarfs. For Capitol Hill, seven is also an important number, because seven years ago, Carl Nelson retired and began his magical garden on Massachusetts Avenue, S.E.

If you met Carl at Frager’s one afternoon, you probably would never guess that he is the proprietor of the garden. Carl is a typical Capitol Hill retiree with a long history in the neighborhood having arrived here in 1974. He has a great smile and a comfortable way about him. You would probably guess he has a small, unassuming garden.

Tucker’s Garden is the front yard of 1363 Mass Ave, SE. It is named after Carl’s dear terrier dog who clearly is the king of home and garden, Carl Nelson had never really been a gardener, but when he retired his wife, Mary Donovan, who died this past February, told Carl he needed to find a hobby. He thought he might enjoy gardening and began by planting a small strip of flowers in the front yard.

Tons of Toys
“One thing led to another,” Carl recalls, “and I kept expanding. My first effort to make the garden more than the flowers started with a desert landscape. I put in a plastic wagon wheel.” From there, Carl got the idea of adding some animals that the neighborhood kids might enjoy discovering. Snow White and the Dwarfs soon followed, although she and many of the dwarfs seem to have disappeared over the years.

“I don’t have many things taken,” Carl says, “and people often add toys.” There are now a thousand or more toy figures scattered across the width of the garden. Carl has recently added a wooden bench so smaller children can climb up and get a good look. People also stop and regroup the toys. Carl says a passerby recently gathered the toy dogs into a posse by the front steps, where an armadillo with red painted eyes has stood guard for years.

The toys cross different decades, from early Disney characters that Carl says younger kids don’t even recognize to Wonder Woman, the Simpsons, and Star Wars. There are dinosaurs, sea creatures, and one of Carl’s favorites, a platypus that hails from Australia, which he found in a dollar bag of toys. The comical nature of the platypus, which looks like a duck sewn into the body of a mammal, maybe reveals Carl’s true nature, a gardener with a great sense of humor.

In the center of the garden, which is laid out in a star pattern to make weeding and toy maintenance easier, stands Hercules. To be exact, it is a replica of the famous Roman sculpture called Weary Herakles. “He is modest,” says Carl, “and yes, he is a big sports fan, especially likes the Stanley Cup winners, the Caps.” Anyone walking by the garden the day after the big win, would have found Hercules not only with his Caps shirt on, but also a ribbon with a large medal (one of Carl’s from earlier days) around his neck. The day I visited, he was sporting a yellow rain slicker and, when things heat up, Hercules sports a Hawaiian shirt.

Old-fashioned flowers
The garden is magical because Carl stealthily combines plants, succulents, and old-fashioned cottage style flowers with the dazzling display of toys. Starting at the front of the garden, where the toys are easily seen, he plants an array of succulents that the toys can be hidden around. Many of these plants come from Frager’s Garden Center. They are great ground covering and only require occasional weeding of clover. Carl says he plants about a hundred seeds in the spring, but now that the garden is established many of the plants like the

Rudbeckia, commonly known as black-eyed Susans, and the Echinacea or coneflowers come up on their own each year. His sunflowers come in different sizes, and he soon will replant the zinnias since they tire out as the season goes along. This past spring, Carl, added some roses closer to the front door. In July, this garden is stunning whether you are looking from the street or viewing out his front bay windows.

Everyone needs a special place of enchantment. Capitol Hill cannot thank you enough, Carl, for making one for all of us to enjoy.

Rindy O’Brien is a local gardener and is wonderstruck with Tuckers Garden. Contact her at rindyobrien@gmail.com 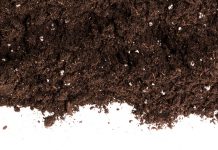