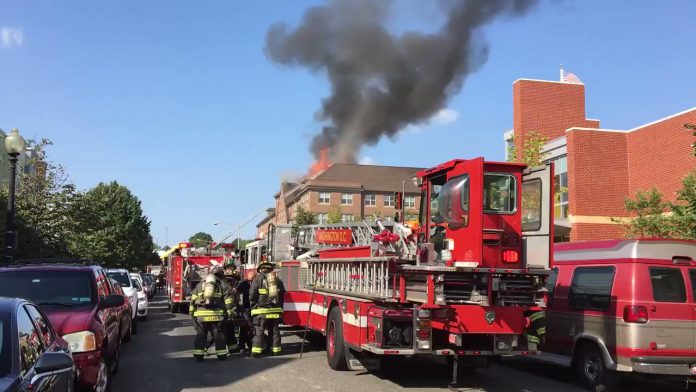 A 74-year-old man was pulled from the rubble of Arthur Capper Senior Housing Monday morning, five days after a fire devastated the building. Mayor Muriel Bowser made the announcement at a press conference Monday afternoon. Officials said that he had been trapped in his second-floor apartment since the Wednesday fire.

His rescue was first reported by Fox 5 DC.

The man was discovered by a team of structural engineers, who went in to evaluate the safety of the structure prior to the entry of the Fire Marshal. Mayor Bowser said that the crew helped the man into a chair and out of the building.

President of KCE Structural Engineers Allyn Kilsheimer said that he was part of the group that found the man, who responded to the noise they made at the door of his second floor apartment. The man was sitting on his couch when they broke his door down, he said.

“He had a sense of humor. When I said, ‘we’re coming to get you,’ he said, ‘I’m not going anyplace,'” Kilsheimer said.

Kilsheimer said that no matter his mobility, the man would have had difficulty exiting apartment as his door was swollen by water. He was carried out on a kitchen chair, and later admitted to hospital with non-life-threatening injuries.

‘They Had Not Laid Eyes on Him’

Director of the Department of Human Services (DHS) Laura Zeilinger said that building management to had previously had the man on a list of residents that were accounted for.

“Today they acknowledged that they had not laid eyes on him personally, although they had for the rest [of the residents],” she said Monday.

The building is privately managed by the Edgewood Management Company.

Fire Chief Gregory Dean said that the customary secondary search for survivors in the building was disrupted by fears that the building was collapsing. He said one or two units may have been missed in the search.

Bowser said that DC FEMS and structural engineers will enter the building shortly with canines to assist in another search of every unit. She said that 132 residents are being sheltered at hotels, and less than 30 people are currently believed to be staying with family and friends. The Mayor said that the District will double-check those units and confirm the residents’ status.

In an update later that evening, officials said that all residents had been contacted and accounted for, adding that a further search of the building would be undertaken once the building had stabilized. Four people were sent to hospital the day of the fire, and more than 150 people were displaced by the blaze.

Initially a two-alarm fire, the blaze was quickly upgraded to three alarms. The 162-unit  housing complex composed of affordable one and two bedroom units exclusively for seniors was completed in 2007. Bowser said that 161 of the 162 units were occupied as of Wednesday.

Arrest Made in Nov 2017 Northeast Carjacking