Councilmember Charles Allen (D-Ward 6), who attended the meeting briefly before moving on to a Council oversight hearing, secured funding for DGS to begin the design-build process last fall. The project has a total budget of $5.9 million. The goal is to finalize drawings for permitting by the end of the winter, allowing construction to begin in August or September of 2019.

Representatives from the Department of General Services (DGS) hosted the meeting, speaking together with members of the Design Build Team (DBT). DGS Project Manager Cassidy Mullen and Susan England of LandDesign did much of the presenting.

Mullen said that the design team had met three times with the Eastern Market Metro Park Advisory Team (EMMPAT), and twice with the community. Information gathered at the meetings and feedback from more than 700 community members gathered through a DGS survey conducted throughout December and January were incorporated into the concept presented at the meeting and would also be used in the third design.

DGS Project Manager Mullen said that the project was still in the concept design phase, noting that the team was still in the process of gathering information towards formulating a third and final concept. He said an initial ‘ground-up’ environmental assessment has already been completed, and phase two, analyzing what might be under ground, will be underway shortly.

Mullen said some progress was hampered by the Federal Government shutdown in January. A planned traffic assessment was delayed to incorporate the commutes of government employees, and is now expected to take place in February. An unofficial meeting slated for January to gather feedback from the Commission on Fine Arts (CFA), the federal agency that must approve the design took place Monday, two days before the meeting, preventing the team from incorporating any suggestions into the second concept design. 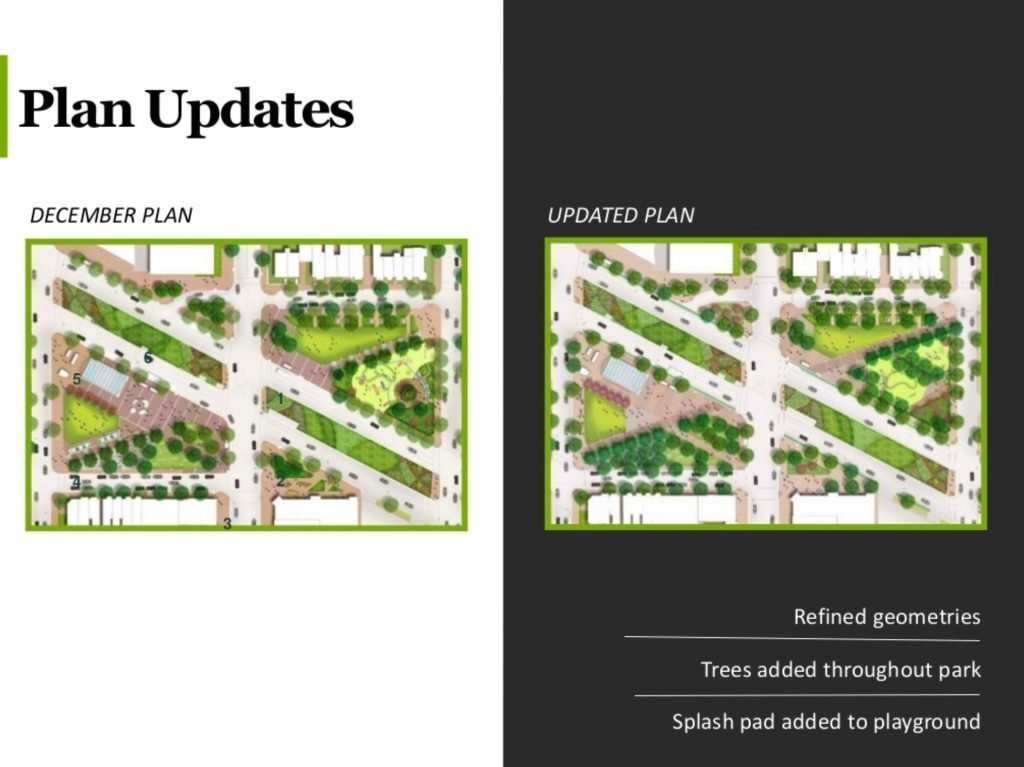 Mullen and the team emphasized that the second concept design presented was a work-in-progress. Changes from the first design included the addition of more trees in the Bosque near the metro entrance as well as on the Parcel 1, the site of the George Didden holiday tree. A planned water feature for the children’s playground on the same parcel was replaced with a splash pad near the Pennsylvania Avenue side. Trees and seating were added to the northern edge.

On Parcel 4, the site of the Eastern Market Metro entrance, the team pointed to a wide ‘civic ‘lawn’ allowing a clear view of the façade of the Southeast Library. The lawn is intended for use by the library as well as public events such as festivals. For ease of maintenance and durability, the team said the lawn would be covered in artificial turf. Additional trees have been added to the Bosque on the south side of the parcel, with movable furniture beneath.

The team said that they were still discussing whether to close D Street SE to traffic on for the short length between Eighth Street and Pennsylvania Avenue to the north of Penn (Parcel 6, in front of Trader Joe’s) and south (Parcel 3, in front of Dunkin Donuts), noting that the south portion was more likely to be closed at this point in planning.

The team also noted that the District Department of Transportation (DDOT) had been looking at reversing the direction of D Street SE to proceed westbound on the south side of Pennsylvania Avenue, away from Eighth Street SE. Pointing out that such a reversal might help relieve congestion in the area, the team said they were considered a similar reversal for D Street north of Pennsylvania, so that traffic would proceed westbound away from Eighth Street.

Susan England of Urban Design firm LandDesign emphasized that the goal was to create a fully implementable plan, not just a paper design. The team noted, however, that the $5.9 million budget for the project could not cover work on all six parcels of the EMMP area, and that choices would have to be made.

Community members questioned the rationale behind reversing the direction of D Street, arguing that the diversion of traffic towards Ninth Street and Seventh Streets SE would do little to relieve stress in the area. Mullen emphasized that the team would undertake a traffic study before any decisions were made in regard to the redirection or closure of parts of D Street SE.

Others raised concerns in regard to safety, in particular the lack of visibility that could be a consequence of increased tree coverage on Parcel 1, currently the site of frequent congregations of people in the darker hours. One person asked if an emergency call box had been considered. England emphasized that visibility was important to the team, and that trees with high canopies would be selected for the site. A DC DPR representative spoke to add that parks and recreation was beginning to incorporate security cameras at many District parks and would consider using them at the site.

Noting that both the foliage and installations in the design would require constant care, a resident asked if there was a maintenance plan or budget for the design. Mullen replied that while there was no such plan at this time, a deliverable required of the team was such a plan, together with a lifetime maintenance budget for the project.

Mullen said that he could not comment on whether the metro bus stops, particularly the one located in front of Starbucks Coffee, would be relocated to the plaza, saying that decision fell to WMATA.

An audience member asked that a future community meeting be jointly attended by DGS, DPR, the EMMP design team as well as representatives from DDOT and WMATA. Mullen and the team expressed hope for greater involvement from other agencies, noting that DDOT was present at the Dec. 13th community meeting.

DGS has scheduled the next EMMP Community meeting, at which a third and potentially final concept design will be presented, for Wednesday, April 3. The meeting takes place from 7 p.m. to 9 p.m. at the Eastern Market North Hall (Seventh Street and North Carolina Avenue SE).

Survey results, presentations and the most recent EMMP concept drawings are available on the DGS project website.