Avec Le Temps ••••
Giovanni Guidi, piano
Thomas Morgan, double bass, João Lobo, drums, Francesco Bearzatti, tenor saxophone, and Roberto Cecchetto, guitar.
The phrase “rest in peace” is such a beautiful statement when applied to the memory of a loved one or a dear friend. The late Polish trumpeter and composer Tomasz Stanko was such a friend to a host of musicians around the world. This latest album, Avec Le Temps, from pianist Giovanni Guidi and his friends, is a fitting tribute to Mr. Stanko musical genius. Mr. Stanko, known for his particular style of free jazz and avante-garde, would certainly be at peace with the album’s tonal sophistication and balanced tempos perfectly proportions in this repertoire: strong, resilient rhythms, thoughtful, colorful textures, detailed phrasing and a vivid feeling for the music visionary quality and unpredictability. Among the outstanding pieces are “Caino,” “Ti Stimo,” and “No Taxi.” They range from the melancholy or sultry to the energetic or fiery. From first to last, these performances are genuine, intuitive emotions, poignant at the end, intensified by the celebratory beauty of the music. 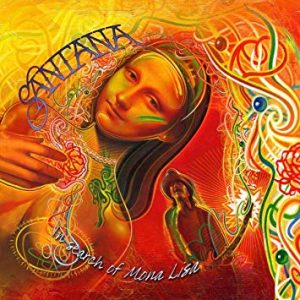 In Search Of Mona Lisa •••
Santana, guitar
The legendary Santana has offered us a sampling of his latest musical adventure from what he described as “a magical and deeply personal experience” he had when he visited the Louvre Museum and set his eyes on the Mona Lisa painting, Leonardo da Vinci’s beguiling masterpiece. We are also told that a new full-length album produced by Rick Rubin will be released this summer. For those of us who have seen the Mona Lisa painting I would suggest to please take a listening to “In Search Of Mona Lisa,” “Do You Remember Me,” and “Lovers From Another Time.” All three love-songs evoke some aspect of awakening, weather benevolent, romantic, transfigured or in some part the necessary ecstasy and longing. There is a wonderfully luminous soundscape here; a combination of superb compositional skill, and reverent musical direction. The recorded sound is clear and infectious, with a well-judged vocal-instrumental balance.

The video opens with Mr. Culbertson walking the Vegas strip filmed overhead by a drone. The two-and-a-half-hour performance was lensed in its entirety with the video offering 26 songs plus bonus features, including “BC Medley” from 2016’s Funk! Tour Live, an in-studio performance of “Through the Years,” a solo piano performance of “All My Heart” shot live at SiriusXM, the “Mile Sauce” cartoon, and a commentary track from Mr. Culbertson and Mr. Miskel.

Mr. Culbertson holds down the keyboards, grand piano, trombone and vocals, sharing the stage and spotlight with his five-piece band – Marqueal Jordan (saxophone, vocals and percussion), Eddie Miller (keyboards, organ and vocals), Tyrone Chase (guitar), Joewaun Scott (bass) and Chris Miskel (drums). They are joined by special guest vocalist Noel Gourdin along with comedic bits from Sinbad that separate each act. Highlights include “Colors of Love,” “Don’t Go,” “Through the Years,” “In Your Embrace,” and “All My Heart.”

Getting into the Swing of Things: Your Guide to All-Star Week