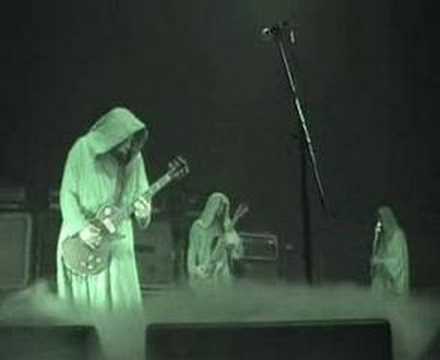 Submerged in a dense haze of fog. In some moments the shadowy silhouette of a cloak peeks through the haze. A riff resounds throughout the fogged sea of silhouettes vibrating the body to its core. Vision shifts with each foggy change of color. Welcome to Sunn O)))’s April 28th performance. Known for being an anomaly, his show lived up to every expectation as the band pulled in fans from metal fans to anyone intrigued by the avante garde.

Sunn O)))’s recent, “Life Metal” is straightforward effort that disguises the band’s intentions. The album is not to be over complicated and picked apart. It is better encountered or ultimately immersed in. The band’s show was no different, breathing the album into the present and lulling the audience into thoughtless reflection. Just as the audience transforms into a faceless sea of silhouettes, the song titles become nameless.

Noticeable from the from the beginning was the absence of drums. It is a reminder how little instrumentation a band needs to be heavy. The vocals were quite hidden and unpronounceable, akin to monastic chants. Their hypnotic cadence made the concert a quasi-spiritual experience. Time evaporated as each riff washed over the audience like an ocean wave. Despite the sheer sound volume, I removed my ear plugs out by the middle of the show to garner full effect of some of the smaller details hidden within the drone.

Even if not a metal fan see Sunn O))) live simply because it is a show like no other.