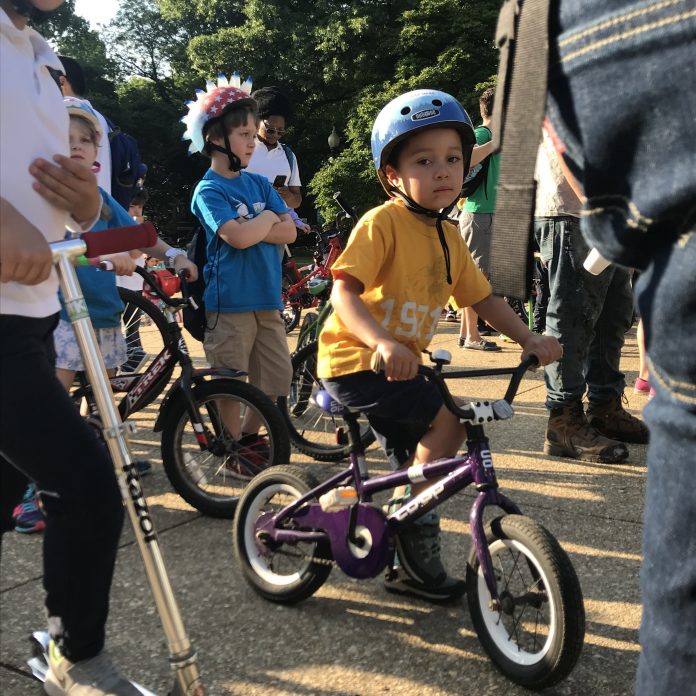 Councilmember Charles Allen (Ward 6-D) again cycled to Lincoln Park Wednesday morning to serve as the Master of Ceremonies for Bike to School Day. Organized by the newly-named Ward 6 Public Schools Parent Organization (W6PSPO) in partnership with the National Center for Safe Routes to School, the event gathered students from more than 16 Ward 6 schools for activities, snacks, exercises, performances and speakers before students headed en mass to school. 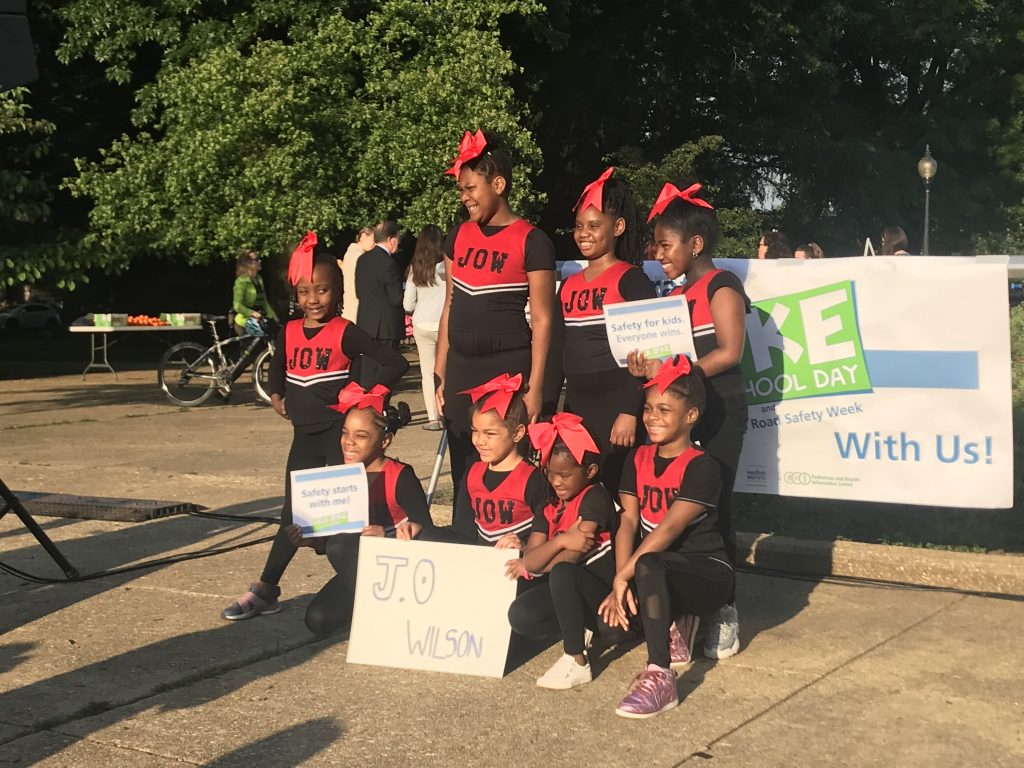 Bike-to-School Day builds on the popular Walk to School Day, which is celebrated across the country – and the world – each October. Many communities and schools have been holding spring walk and bicycle to school events for years. Allen commended organizers, saying that the Lincoln Park event has historically been the largest in the District.

The crowd enjoyed performances by the J.O. Wilson cheerleaders, the Tyler All-Star Steppers and the Eastern High School Blue and White band, which led the parade of cyclists east from the park.

Can you think of a better way for ⁦@MauryElementary⁩ to bike to school than being serenaded by the Eastern High marching band? #BiketoSchoolDay pic.twitter.com/iRs8POFEit

Speakers included Deputy Mayor for Education Paul Kihn, Director Jeff Marootian (DC Department of Transportation), Nancy Pullen-Seufert (National Center for Safe Routes to School). Lord George Robertson, (Chairman of the FIA Foundation, an international organization working towards road injury prevention, told the assembled students that they should contact their representatives and tell them how important road safety is to them.

Allen said that DC Council is taking road safety very seriously. On Tuesday, he introduced a Vision Zero Omnibus Bill. Allen’s bill focuses on creating streets with safe accommodations for pedestrians via improved sidewalks, crosswalks and intersections and more protected bicycle lanes for cyclists and other non-car users. It calls for stronger enforcement of traffic laws, including higher penalties as well as more frequent updates to DDOT’s transportation plan to reduce car traffic.

Road safety is a major topic of conversation in the District this spring. Ten people have died in traffic collisions in the District so far this year. Two people succumbed to injuries from road accidents this weekend, including a 24-year-old man who was struck in a crosswalk Friday night in Ward 7 and the death on Sunday a 34-year-old woman injured in an accident April 21.

Metropolitan Police Department (MPD) officers surrounded the park, directing traffic and helping cyclists travel safely. As the festivities wound down, caravans of cyclists headed to school, joyfully cycling to another full day of learning. Learn more online about National Bike and Walk to School Days, W6PSO (which also organizes a Walk to School event in the fall) and the National Center for Safe Routes by clicking on their titles.

EMCAC Report on Operations and Use of Seventh Street SE