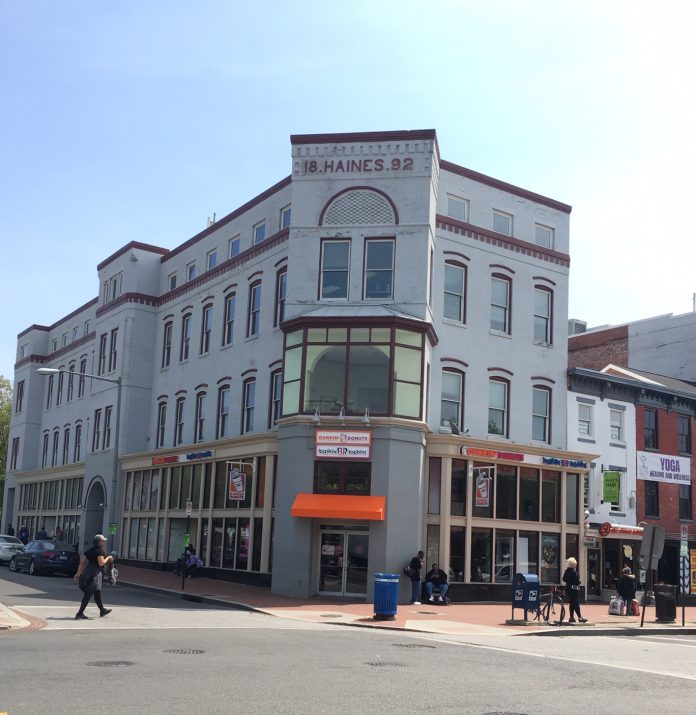 Not many Capitol Hill women have a building named after them, but Elizabeth Morrison Haines does. She built the large grey building that still stands at the corner of Eighth and Pennsylvania Avenue SE, in 1892. The building featured 15,000 square feet of trading space on two floors for 50 different departments, plus a third floor that was rented out to local vendors – an impressive achievement.

The Ward 6 Democrats are continuing their recognition of the women of Ward 6 by honoring Elizabeth Haines in May. She was a highly successful entrepreneur and businesswoman who advertised her building as “the largest store in the world built, owned and controlled by a woman.”

Born Elizabeth Morrison in the 1840s in Ohio, she married Mahlon Haines. They had three children, the last just a few weeks before Mahlon was killed in an accident. She moved to Washington in 1882 so her children could be educated in DC schools.

At first, they lived above a small store on 11th Street SE. Her first successful business was a shop in Anacostia; her second was a larger shop in the 1200 block of 11th St. SE. In 1892, she oversaw construction of the Haines Building, which now overlooks the Eastern Market Metro station. Total construction time for the building was six months, from groundbreaking to store opening. An article published four years later described it as “a store with all the modern conveniences, where trading becomes a pleasure instead of a vexation.”

A severe depression in 1893 rippled throughout the United States, and the economy did not recover until 1897. In spite of this, Haines persevered, and her store survived, even when a fire burned much of it in 1905. Haines also gave money to causes she believed in, including posting bail for several of the leaders of Coxey’s Army, the first organized protest to end up on the Capitol grounds.

In 1910, Haines sold her store to Milton Ney and Joseph Goldenberg, who sold off most of the stock in a major “reorganization sale,” and then, having renamed it the Haines’ Department Store, continued to run it for many more years.

The Women of Ward 6 initiative, a nonpartisan effort, honors women who have worked or lived in Ward 6 and made significant contributions to better our lives. The initiative, in partnership with the National Woman’s Party, Capitol Hill Restoration Society and the Hill Rag, will culminate in the 2020 centennial of the ratification of the 19th Amendment, which gave women the right to vote.

Marci Hilt is the treasurer of the Ward 6 Democrats. For more information, visit www.ward6dems.org.

Man Arrested for Possession of Ammunition