The role of Chair of an Advisory Neighborhood Commission (ANC) is a time-consuming one. Just like other commissioners and officers of District ANCs, Chairs are volunteers, working in their roles on the ANC in addition to the demands of their regular careers. The Chairs set agendas and facilitate meetings, officially receive commission correspondence, oversee procedure and promote good relationships between the Commission and District organizations. They may also act as spokespeople for the views of their particular ANC.

Learn more about the people doing this time-consuming work. Meet three chairs of your neighborhood ANCs.

Karen Wirt (ANC 6C02): Continuing the Good Work
ANC 6C02 Commissioner Karen Wirt has served as Chair since 2006. First elected in 1994, Wirt has served continuously throughout, aside from a two-year break to allow another commissioner to run for election. She has represented three SMDs: 6A03, 6C08 and now, 6C02. While the ANC boundaries may have changed, Wirt has remained constant: she has lived at the same address since 1978.

Wirt said she was recruited to serve when Carolyn Serfass, then Commissioner for 6A03, asked if Wirt would be willing to run upon her resignation. Wirt agreed, setting a high standard for her tenure. “I said I would try to continue her good work,” she said.

For the past 22 years, Wirt has done just that. As commissioner, she provided oversight regarding the air rights over Union Station and helped to shut down a grocery store at the intersection of Fourth and F Streets NE that was known to be selling liquor and cigarettes to minors.

“One of the greatest joys of my life has been working to make improvements in the community,” Wirt said.

She said that it is always a challenge to get the attention of the District Government agencies and to work with them to respond to concerns voiced by the commission. Still, these are part of her consistent goals for the commission.

When asked, Wirt quickly ticks off the goals of ANC 6C. She says the purpose of the ANC first and foremost is to respond to constituent requests for assistance with DC government concerns. The commission also wants to be proactive in improving safety for pedestrians, bicycles, and vehicles, particularly in light of multiple accidents involving pedestrians, cyclists and even Metro busses on H Street NE.

The ANC will continue to monitor zoning changes for the betterment of the community, she said, as well as events that negatively impact our streets, such as parking problems during large marathons. The commission has also emphasized concern for the environment under Chair Joe McCann, voting to add ‘Environment’ to the title of his Environment, Parks and Events Committee.

Wirt is clear that the members of the community and the constant growth of the neighborhood are what has kept her coming back to the challenging role of ANC Chair. “The best part of being a commissioner is working with the other ANC 6C commissioners and seeing their passion and commitment to making our neighborhood the best it can be,” she said.

Gail Fast (6D01) “We’ve Got to Keep Going’
Commissioner Gail Fast (6D01) has lived in Southwest for 28 years. She remembers the old days, when it was a struggle to find a good cup of coffee and she could get breakfast at Lucky’s in Waterside Mall.

She won a seat on the ANC in 2016 against three competitors, many with more visibility than she. Community members that had worked with her on the Small Area Plan encouraged her to run. “I probably knocked on 800 doors –well I know I did, because I had 800 fliers,” she said. “It was a great feeling to connect with people in the community.”

Fast said it was the right time for her to run for Chair. Three new commissioners were elected to ANC 6D for 2019, and other long-term commissioners had previously taken on the role. “I felt it was time for me to grow, and this was a great opportunity for me to do so,” she said, noting that the tremendous learning curve and responsibility that comes with the role.

Fast said the major issues facing the ANC haven’t changed since her first campaign in 2016. “Transportation: that’s always been my passion as far as what I think that I can bring to the table.”

She said access to the neighborhood is sometimes blocked east of Independence and on the ramp from the 395 to Maine Avenue, frustrating constituents. “I think we can solve it by better signalization and other modes of transportation, and that’s what we plan to work on in the future.”

The second issue facing ANC 6D is development, she said. “I think that my constituents are welcoming with open arms, they’re excited about new folks in the neighborhood. But they’re also struggling now with parking, and getting in and out of the buildings, and you know, just a lot of people.”

Finally, the neighborhood would like to see more affordable housing and home ownership opportunities amongst all the development in the area. She said the ANC wants some parcels to be available for folks to invest themselves in the community.

“When you have a ton of rental, you don’t really get as much a sense of community, and Southwest was always about a sense of community.” She said the ANC intends to work on that with projects now in the planning stages, pushing for condos and townhouses where people can start families and grow within the community.

Fast said she has a quote that she lives by. It is widely applicable, she acknowledges, but it applies to community efforts in Southwest: “Just because something is difficult doesn’t mean it’s impossible.”

She said it is relevant as the ANC and the neighborhood continue to work to maintain cultural and socio-economic diversity, keep folks in old Southwest and allow people to age in place.

“It’s difficult. It’s going to take a lot of people and a lot of resources,” she said, “but it’s not something that’s impossible.”

“We’ve got to keep trying.”

Learn more about the role of ANCs by visiting https://anc.dc.gov/page/about-ancs. Find your ANC and SMD by entering your address at https://www.ancfinder.org. 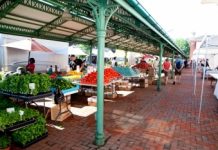