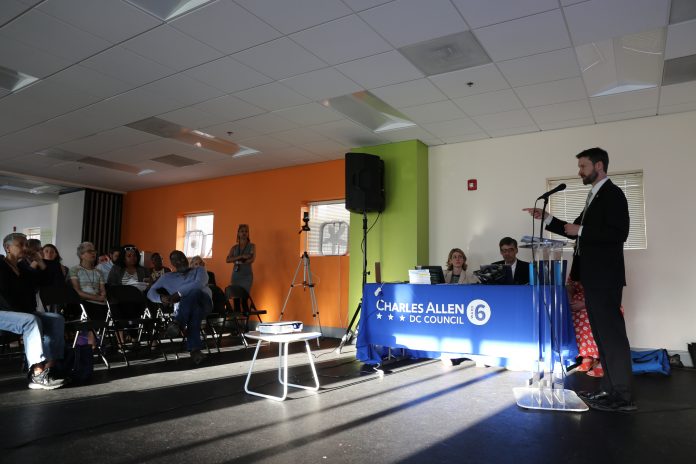 The Council just voted unanimously to approve the budget for the District of Columbia for the next fiscal year, $15.5 billion in total. It is the plan and allotment for every dollar the District will spend on schools, parks, roads, sidewalks, police, fire, and so much more from October 1, 2019 to September 30, 2020.

As your Ward 6 Councilmember, the budget is my chance to ensure neighborhood needs are funded. I want to thank everyone who attended my budget town hall last month to share your priorities. As the Chair of the Committee on the Judiciary and Public Safety, I also am responsible for setting the budget to ensure the District is a safe and a just city. I’ll share a few highlights from the Committee’s budget as well as Ward 6 project updates below.

Since DC government serves the functions of both a city and a state government, the budget looks much larger compared to other cities per capita. But only about $8.6 billion of the total are local funds (property tax, income tax, sales tax, etc), while the remainder is federal funding (Medicaid payments make up a large portion) and other special forms of revenue.

So what’s in the budget for Ward 6 residents? A whole bunch. Here’s a quick overview of major priorities and some projects I secured funding for here in Ward 6:

Education: The Council increased the per-pupil student funding formula, which is the main way most of our schools are funded. It also increased funding for at-risk students, which is extra funding to assist schools serving students with greater needs. We continued capital funds to keep Ward 6 schools on-track for modernization and needed repairs – just as Maury Elementary School and Jefferson Middle School wrap up, Capitol Hill Montessori at Logan gets underway and School Within A School at Goding and Eliot-Hine continues. The budget also funds important health and safety initiatives at schools and keeps the Capitol Hill Cluster School Shuttle Bus operating.

Expanding Early Childhood and Elementary Education: I hear constantly the frustration of not enough seats in the city’s Pre-K 3 and 4 programs. This budget adds capacity by building a new childcare center next to Miner Elementary and renovates the Joy Evans Field House to ensure Van Ness Elementary has space to continue growing. The budget also makes permanent a $1,000 tax credit toward child care for families earning $150,000 or less.

Affordable Housing: The budget makes an increased investment in the Housing Production Trust Fund and commits $49 million to emergency repairs in public housing — a critical source of deeply affordable homes for Ward 6 residents.

Senior Services: The budget locks in long-term, annual funding for the Safe At Home Program, which helps seniors outfit their homes with safety and quality of life improvements to allow them to age-in-place. Additionally, it funds a Senior Strategic Plan to help the District understand what senior needs are in each part of the city.

Public Safety: In my Committee, we tripled the investment in violence prevention funding, which has shown early signs of being very effective at preventing violent crime by working closely with those at-risk of committing or being the victim of a violent interaction. We also extended the Senior Police Officer program to allow MPD to retain the services of experienced detectives and sergeants who are set to retire.

Parks and Playgrounds: A small, but important, part of the budget comes in funding and enhancing our public spaces where we play, meet, think, and just go to be outside. In addition to the green space coming in Eastern Market Metro Park mentioned above, I’m happy to announce that both Amidon-Bowen Elementary and Seaton Elementary schools will be getting new playgrounds. I’ve also secured funding for upgrades to the park at 17th and C St., SE, known to many as Spielberg Park.

Public Transit: The big ticket item of note is consistency. For the second straight year, this budget includes $178 million in dedicated funding to WMATA from the District, which you might remember is our portion of a deal struck with Maryland and Virginia to give our transit system a reliable revenue source. Additionally, the NoMa-Galludet Metro Station will be getting a new entrance/exit closer to Florida Avenue. Given the incredible growth coming to that neighborhood, this entrance will be critical in connecting all of the new housing and businesses popping up near Union Market and NoMa along Florida Avenue to public transportation.

This is far from an exhaustive list of everything funded in the budget, but some of the highlights based on what Ward 6 neighbors asked me to prioritize. Once again, I want to thank the many Ward 6 neighbors who spoke with me at my town hall, at community office hours, or over email or a phone call – your voice helps me and my team do our work. As always, I can be reached at callen@dccouncil.us if you have questions or concerns.