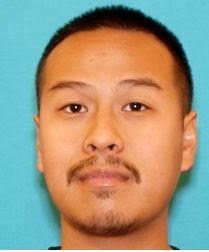 Detectives from the Metropolitan Police Department’s Homicide Branch are looking for a suspect in the homicide that occurred on Saturday, June 15 in the Jenkins Row Apartment complex (1391 Pennsylvania Ave. SE).

The suspect in this case has been identified as 30-year-old Peter Nhek Neth.  He is currently wanted on a DC Superior Court arrest warrant for First Degree Murder while Armed and can be seen in the photo above.

NBC Washington reported Monday that the shooter was a friend of the victim, 37-year-old Richfield Chang, and his girlfriend. Police found $100,000 in cash and some marijuana.

Chang was found unconscious, not breathing and suffering from multiple gunshot wounds.  DC Fire and Emergency Medical Services (DCFEMS transported him to area hospital where he was pronounced dead. An adult female victim was also found inside the apartment, conscious and breathing, but suffering from multiple gunshot wounds. She was transported to an area hospital for treatment of life-threatening injuries.

Anyone who knows the whereabouts of Peter Nhek Neth, or who has knowledge of this incident should take no action but call police at 202-727-9099.  Additionally, anonymous information may be submitted to the department’s Text Tip Line by sending a text message to 50411.

The Wrong Choice for DC Workers