July is here and as we prepare to salute our troops and celebrate the Fourth of July, we may find ourselves passing by the Marine Corps Barracks at the corners of 8th and I Streets, SE. The Barracks is the oldest post of the Marine Corps, a site designated by President Thomas Jefferson, who rode his horse from the White House through Washington looking for a site for the Marines.

The Marine Corps Barracks hosts The Evening Parade every Friday from May through the end of August where hundreds of DC visitors and residents enjoy an evening concert intertwined with marching and military traditions of tattoo, retreat and lowering the colors.  But, what you may not know, that the all-volunteer community garden adjacent to the Barracks has been created and maintained with the same reverence, and is a great American story of a different kind.

The Pocket Garden
Across the street from the very manicured yard and gate of the Barracks stands a pocket park, that is as stunning as the military facility. It is full of trees, grass, and a block long country flower garden framed by Interstate 695 overhead. The garden with its dazzling array of plants and colors has been nicknamed, The Gateway to Barrack’s Row, and deservingly so.

Jim Guckert, a neighbor and the leading founder and gardener of the park, says he really isn’t sure who owns the land that forms it. He knows the city doesn’t do anything to maintain it, other than the Urban Forestry division occasionally planting trees in the park.   It has been Jim’s mission over the last 15 years to create a welcoming environment for the neighborhood and the many visitors that come through in the summer for the Marine parade. His effort could be described as an act of guerilla gardening.

Guerrilla gardening is the act of gardening on land that the gardeners do not have the legal rights to cultivate, such as abandoned sites, areas that are not being cared for, or private property.  The term   became popular in 1973 when a number of abandoned sites were made into pocket parks in New York City, and in Berkeley, California. While this park’s ownership is unclear, Jim’s gardening efforts have been recognized by a number of Capitol Hill community organizations, and receives financial support from the nonprofit Barrack’s Row Main Street group and the Capitol Hill Community Foundation.

But while Jim is the one you often see weeding the flower beds and watering the plants from his own house across the street from the park, he is quick to point out that this park is really about community involvement and not about him. Jim says that there is a group of neighbors and gardeners who come in early spring to help get the beds ready for a new growing season. Over 60 bags of mulch are delivered from Ginkgo Gardens and the volunteers distribute mulch all in one day. The Urban Forestry division of DDOT (DC Department of Transportation) have been great, planting new cherry trees and replacing elms that are not thriving in the tree boxes.

Day Lilies and More
Jim came from a rural upbringing in northwest Pennsylvania, and has always loved working in a garden. His choices of flowers to plant along Barrack’s Row reflect the the country flower gardens of his youth filled with day lilies, peonies, daisies and hollyhocks. Jim says the garden really got started with the first Barrack’s Row revitalization plan that was spearheaded by Linda Gallagher and George Didden. “Linda was especially helpful and encouraging to see the area at the end of lower 8th Street be cleaned up and beautified,” says Jim. A homeless encampment under the interstate also had to be cleared out before they could get started but today the park really is a gateway to the new restaurants and establishments, like the Brig, that are on the other side of the highway.

The garden got another big boost early on from the Capitol Hill Garden Club. For a number of years the Garden Club had a daffodil bulb giveaway, and Jim was able to obtain thousands of bulbs from them. Another windfall of bulbs came from a movie production that was filming at Eastern Market. “The scene was to depict a European market with carts of flowers and bulbs, “Jim recalls. When the filming was over, he was able to rescue the bulbs and take them to 8th Street.”

Jim says that these days they are happy to fill in color with plants like geraniums in red and white colors, and try to honor the Marine Corps by finding flowers that are scarlet and gold.

The future of the garden looks bright. Jim says that he finds little trash and littering, and there has only been occasional unauthorized cutting of the flowers. Coming next may be shrubs to balance the new cherry trees.

As we all know, a garden is always a work in progress, whether it is your personal one, or a “guerilla” public one. Capitol Hill is so lucky to have Jim Guckert and his garden volunteers caring for the public space that honors and salutes our Marine Corps neighbors and provides a beautiful entrance to Barracks Row.

Rindy O’Brien is a long-time resident of the Hill, who appreciates our transplanted residents share their love of gardening with us. Contact Rindy at rindyobrien@gmail.com 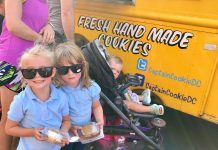