August is the magic month for tomatoes. It is magical to see the struggling little plant we bought in April is now taller than we are; full of tiny flowers that have turned into plump round delicious tomatoes for our tables. If we are so lucky, this is what has happened in our gardens over the summer.

Tomatoes are the most widely grown vegetable in the United States. Over 16 million tons of tomatoes are grown in the United States each summer. Many don’t realize that tomatoes are actually a member of the nightshade plant family. For centuries the plant was believed to be toxic. It wasn’t until the 18th century in England and France that the tomato became part of the culinary scene. Imagine a summer without a BLT!

Scientifically, the tomato is a fruit, not a vegetable. Jalapenos, avocados, and tomatoes are all fruits because they contain the plant’s seeds. There are 25,000 to 40,000 varieties of tomatoes worldwide. So, it should not be a surprise to know that scientific research on tomatoes continues today with new emphasis on urban gardening. And the research is taking place right in our own DC neighborhoods like the Navy Yard. 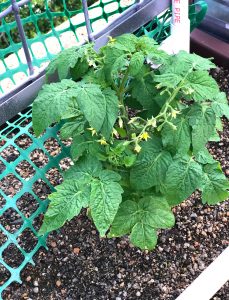 Up Top Acres
Up Top Acres located on the roof of 55 M Street, SE is an urban Farm, a block from Nationals stadium. The farm began with a small group of DC residents who wanted to bring local produce to their neighborhood and, in the process, help with storm sewer runoff by absorbing rain. The 15,000 square foot farm was built in July 2016 in partnership with Hines, an investment management firm. It produces a wide range of crops, including salad mixes, cucumbers, squash, peppers, tomatoes and zucchini. The farm features two beehives and an event space with breathtaking views of the DC skyline.

Capitol Hill neighbors can sign up each spring for a farm membership and receive 18 weeks of farm fresh produce for $276. It’s an arrangement similar to the CSA’s that have been around for some time.

There are additional benefits to being a member, including a happy hour once a month, and recipes for getting the best from your produce. The season runs June to early October. To find out more you can reach them online or contact them at grow@uptopacres.com. In addition to the community farming and sharing aspect, Up Top Acres is a part of a very important research project on tomatoes.

Tomato Research at UDC
Dr. Matthew Richardson, Assistant Director for Urban Agriculture Research, and his research associate, Caitlin Arlotta, are heading the urban rooftop tomato research project. The research is being conducted in four different locations around the DC area. It looks at different kinds of containers, buckets, and field plantings, hydroponics and aquaponics. Three of the locations are on rooftops; Van Ness green roof at UDC, The Station in Alexandria managed by Rooftop Roots, and with Up Top Acres in Navy Yard. In UDC’s Firebird Farm in Beltsville, the research provides comparison studies with the tomatoes being grown in soil and other environments.

UDC conducted a similar tomato study last summer looking at the effects of rooftop gardening on large red tomatoes. The research is funded by the USDA through the Agriculture Marketing Service (AMS), the government department that is responsible for guaranteeing the quality and availability of wholesome food.

Catlin explains that in each location five different kinds of cherry red tomatoes are being grown. A central data system collects the reports from interns who twice a week note information about the plants. The tomatoes were grown from seeds in the UDC greenhouse and transferred outside to containers that use expanded shale material as soil. Each container has two tomato plants of each species. The containers have heavy green plastic netting to protect them from the roof’s gusty winds. There are two sets of containers, one on the north side and one on the south side of the roof.

Caitlin reports that the summer has been productive. “We are seeing some splitting, but not at catastrophic level.” Capitol Hill farm members will be getting the research tomatoes in their weekly pickups for the next few weeks and larger red tomatoes at the end of the month. Other tomatoes not distributed to volunteers or farm memberships will go to local food banks.

The research will measure each plant’s yield, nutrient content along with details about the conditions in which they were grown. “We try and keep the variables of the project to a minimum, which is why we only are looking at red tomatoes,” says Caitlin. “The USDA has an established definition for red.”   UDC’s research will help future city dwellers grow tomatoes thanks to tips on best practices.

The research will be published and available to the public about six months from now through the Department of Agriculture. Check back with UDC’s The College of Agriculture, Urban Sustainability and Environmental Sciences to find links to the official study, at www.udc.edu. In the meantime, enjoy the rest of the summer with a bite of a juicy red tomato, knowing that the future looks bright for our favorite summer treat.

Rindy O’Brien is a long time resident and is loving the roof top gardening coming to the Hill. Contact her at rindyobrien@gmail.com 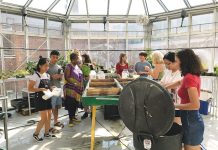 New “Greenhouse Manual” Released for Educators Across the Nation