As the presidential campaign season starts to ramp up, we are once again reminded of the importance of the vote with three exhibits: at the Library of Congress, National Archives Museum and the Portrait Gallery.

There couldn’t be a better place to start exploring women’s suffrage than the Library of Congress (10 First St SE, Washington, DC 20540) exhibit, Shall Not Be Denied: Women Fight for the Vote. It provides a clear, in depth view of the history of women’s suffrage—perfect for people who are just starting to dive in, but with so many interesting items and stories it is thrilling for someone who has known about women’s suffrage for a long time.

Try to find the bust of Susan B. Anthony that is hidden in the corner of the first section along with a letter that she wrote her friend hoping that her bust and other women’s busts would someday sit along the men’s in the Library of Congress. How fitting—and a little sad—that this is the first time that her bust has come to the “Great Library”.

As would be expected, the National Archives Museum (701 Constitution Ave NW, Washington, DC 20408) exhibit, Rightfully Hers: American Women and the Vote, contains some of the most well-known women’s suffrage documents, including the 19th Amendment which legally gave women the right to vote. The exhibit is a chorological display of different posters, letters, and memorabilia, most of which are the original documents.

Be sure to check out the 1910 patented voting machine, which helped states with partial suffrage conceal ballots on which women couldn’t vote. The exhibit doesn’t shy away from some of the grim sides of women’s suffrage. Look for the picture of women in KKK robes marching on the mall and the letter from the women of the KKK petitioning congress to support an anti-immigration measure.

The Portrait Gallery (701 Constitution Ave NW, Washington, DC 20408) exhibit, Votes for Women: A Portrait of Persistence, focuses on the individual women who contributed to the movement. A beautiful series of dozens of portraits greets you as you walk in and makes you feel like you are sharing an afternoon with good friends.

The exhibit reveals the diversity of women who dedicated themselves to achieving women’s enfranchisement. Although the ratification of the 15th amendment in 1870 granted African American men the right to vote, poll taxes, grandfather clauses, and other Jim Crow laws denied them the vote until well into the 20th century. Similarly, the passage of the 19th amendment legally gave African American women the right to vote, but they faced numerous obstacles to doing so. Definitely be sure to look for the picture of educator Mary McLeod Bethune as a young woman—a figure we know from her statue in Lincoln Park.

The Library of Congress exhibit closes in late September, so don’t take your time! You have a little longer for the Portrait Gallery and Archives exhibits: until January 2020 and January 2021, respectively.

Learn more by visiting the websites for each of the exhibits: at the Library of Congress, National Archives Museum, and the Portrait Gallery. 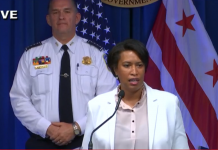