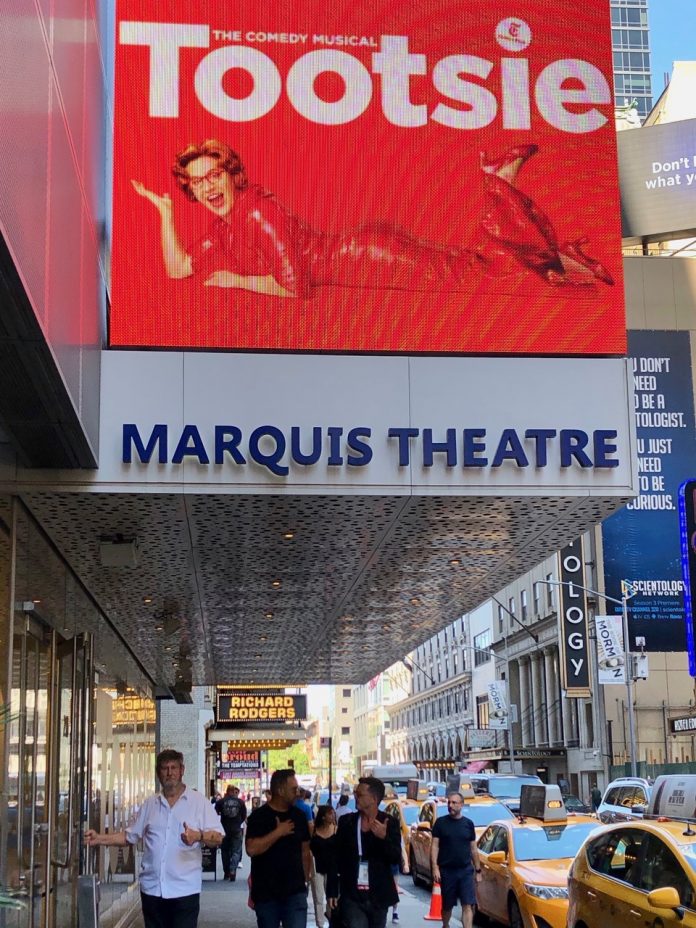 It may seem strange that anyone living on Capitol Hill – smack dab in the middle of one of the most vibrant theater communities in the world – would feel any need to travel outside of the Potomac region to see shows. But Broadway is just a four-hour drive north and its temptations are often impossible to resist. While straight plays might be interesting, it is musical theater that thrills this critic – there’s simply nothing like a Broadway musical in its own Broadway house!

So I journeyed to see what the new season might be offering. It was a promising season with a full baker’s dozen of 13 musicals opening, so I had a list of new musicals I wanted to check out.

But the economic reality of Broadway intervened. Perhaps producers are becoming more savvy, having learned to cut their losses and close shows when it becomes clear that they won’t be making much or even any profit.

Three shows had closed even before the Tony awards were announced. Then, once they learned that they wouldn’t get the bounce a Tony award can bring a show at the box office, those that hadn’t fared well began to announce that they would close.

Over one eight day period in August five musicals played their last performance. King Kong with what Playbill reported was a $35 million investment sent its hugely expensive set to storage. The Cher Show ($19 million) similarly stored its supply of Bob Mackey costumes – they had won him a Tony, but it wasn’t enough to keep the show running.

Pretty Woman ($17 million), The Prom ($13.5 million) and the teen phenomenon that sold lots of recordings but not so many tickets, Be More Chill ($9 million), all closed in those eight-days in August.

So – if the Tony awards are all that important to a show continuing to run, I checked out the ones that walked away with the big honors – the new revival of Oklahoma! which was named Outstanding Revival, Tootsie which earned the Best Book for a Musical award and Best Musical Tony winner Hadestown.

The real joy of the visit was the musical adaptation of the movie Tootsie. A bright, big and bold traditional Broadway Musical Comedy – with the emphasis on comedy – kept a silly grin on my face all evening long, starting with its jazzy overture. Yes, here’s a new Broadway show with a full overture played by a pit orchestra of 19! The show even has an “entr’act” … essentially an overture to precede the second act just as the full overture precedes the first. They familiarize you with the melodies of David Yazbek’s delightful score which ranges from big dance numbers to introspective ruminations like the internal monologue Santino Fontana sings as the cross-dressing title character.

Yazbek provided tremendously funny comedy songs for three supporting performers: John Behlman’s blast of “This Thing,” Sarah Stiles’s tongue-twister “What’s Gonna Happen,” and most hilarious of all, Andy Grotelueschen’s “Jeff Sums it Up,” which gets the second act underway in a full comic romp. Note that all three of those highlights are labeled “explicit lyrics” in the original cast album.

Speaking of original cast albums, anyone thinking of seeing the winner of the Tony award for best new musical, Hadestown, would do well to take a listen before buying expensive tickets. (It is available for free to stream on Spotify.) The show is very much in the spirit of the score and if it is your thing, you are likely to love. If not – not.

The show is a staging of a rock/blues concept album by Anaïs Mitchell telling a modern version of the Greek myth of Orpheus who uses his glorious music to descend into the underworld to bring his love, Eurydice, back from the dead. Mitchell places her version of the story in a New Orleans-like setting and director Rachel Chavkin puts the show’s seven-member band on stage where they become part of the action.

The cast is a bit of a mixed bag. André De Shields is as stylish as ever as the narrating Hermes, a role that won him the Tony Award for best performance by a supporting actor in a musical, and Eva Noblezada and Amber Gray are appropriately intense and satisfying as Eurydice and the goddess of the seasons, Persephone. Best in show, however, actually is the trombone and glockenspiel player in the band, Brian Drye.

Reeve Carney, as Orpheus, is strangely androgynous and doesn’t seem to have a song good enough to rescue his love, let alone to come down through history as the most glorious music ever. What’s more, Patrick Page is merely mechanical instead of menacing as the god of the underworld.

The biggest mixed bag, however, is the Tony award winning “Best Revival of a Musical” Oklahoma! Its highlights are sky high while its letdowns are low indeed.

A 2015 “reimagining” of the 1943 classic Rodgers and Hammerstein musical sets the action in modern day with a country and western tang to the music. Tremendously fun performances by Ali Stroker as a wheelchair riding gal who “cain’t say ‘no,'” and James Davis as her dim-witted but somehow charming suitor who thinks “everything’s up to date in Kansas City,” and a satisfyingly country-western cowboy, Damon Daunno, deliver delights by the dozen.

But the director goes too far in putting his own stamp on a classic with a change in the finale and a self-conscious staging of two scenes in darkness.

But most damaging of all is the remounting of the dream ballet. It was incomprehensible to me. I’m a theater critic and not a dance critic, but I’ve seen multiple productions of Oklahoma!, I’ve read the script in which Hammerstein describes the story to be told in the ballet and watched a video of Agnes de Mille explaining her choreography for the original. Still I wondered what in the world was going on. If a fifteen minute scene isn’t contributing to the play’s storytelling in a way theatergoers can comprehend, its doing damage to the show. (Please don’t ask me to explain why cowboy boots are falling out of the sky! )

Of course, you needn’t stick with the newest shows to justify a visit to Broadway. Great musicals from past seasons are still available. Among those offering a range of Broadway thrills are Aladdin, Come From Away, Dear Evan Hansen, Frozen, The Lion King and Wicked. There’s even The Phantom of the Opera which had already been playing on Broadway for a decade when I first began writing for the Hill Rag back in 1999.

What To Send Up When It Goes Down