The encampment behind a Pennsylvania Avenue CVS store was an extremely complicated and unusual case, Deputy Mayor of Health and Human Services (DMHHS) Deputy Chief of Staff Jessica Smith told a Nov. 25th community meeting. Neighbors had complained of harassment and criminal activity, including potential drug deals, theft from nearby businesses and stolen bicycles.

“I will tell you this is not a typical encampment. We respond to encampments all across the city, and this is very different from what we’re seeing,” Smith said, specifying that DMHHS employees rarely see harassment, illegal activity and theft while in the field.

DMHHS first cleared the CVS encampment Nov. 5, believing the tent to be on public property. Neighbors reported that a new tent was erected within hours. After the space was identified as private property, the tent was removed Thursday, Nov. 14 at the request of CVS. This time Metropolitan Police Department (MPD) officers legally barred those identified by CVS management from being on the private property. DMHHS cannot conduct a clean-up on private space, Smith said.

The meeting was called by MPD Lieutenant Damian Taylor to follow up with the community. The meeting was also attended by Deputy Mayor of Health and Human Services Deputy Chief of Staff Jessica Smith, Assistant US Attorney Douglas Klein, ANC Commissioners Gerald Sroufe (6B02) and Brian Ready (6B03) and a representative from the Department of Behavioral Health (DBH). Taylor said he was disappointed that an expected representative from CVS did not appear.

Residents said they contacted MPD, the Mayor’s Office and  DMHHS by early September in an attempt to have the situation addressed, saying that they were afraid to walk on the north side of D Street SE because they were frequently harassed by people at the site, which they believed was being used for criminal activity rather than for residential purposes.

DMHHS received reports of the encampment and engaged with the occupants around the same time, Smith said. The procedure and timeline in the encampment protocol is outlined in federal law, and an unannounced clean-up can only take place if there is an immediate health and safety risk, such as an open flame or the sidewalk is totally blocked, she said.

A DMHHS outreach team visited the site in October for an assessment and to try to connect occupants with social services, which Smith said was the most important part of the protocol. Services were refused. On Oct. 22, DMHHS provided two-week’s notice, as is legally required before an encampment is cleaned. When they returned on Nov. 5, the occupants had removed some items from the site and DMHHS conducted a clean-up.

After the DMHHS team left, neighbors said it only took hours for a new tent to be erected.

Smith said that during the Nov. 5 clean-up she observed harassment, theft and aggressive behavior, including towards DPW agents attempting to ticket vehicles on the block. “So that’s when we really ensured MPD was involved in a way that they’re not necessarily involved in other encampment locations, because we don’t criminalize homelessness in the District,” she said.

The Bicycles Played a Role

Taylor said that MPD had increased their engagement after he viewed a video sent to him Oct. 8, which appeared to show a drug transaction. He said that while his officers may have been responding to the situation, this was the first sign he had seen that it was more than a simple encampment. That same day, he took a team to the site.

When a nearby resident reported that his son’s bicycle had been stolen, Todd Bissey, local resident, identified it as one of the bicycles locked near the tent and alerted the neighbor. It had been repainted, but the serial numbers were matched and the bicycle was recovered.

“So again, it became apparent that these guys are under the pretext of being homeless, using a tent where they were storing stolen property –felony-level amounts of stolen property,” Taylor said, “and then they also appeared to be selling drugs, and then you have citizens reporting harassment. So, this was escalating, escalating.”

Meeting attendees wanted to know why it had taken so long to remove the encampment, which they said had been present since at least August, when increased police presence near the Southeast Library caused a migration from the library stairs to the rear of the CVS Store (661 Pennsylvania Ave. SE).

“Our whole point is, if anyone had gone to look, as we had said, yourself included, someone might have seen this back in August,” said Adam Belmar, who lives and works on the block. “That’s when all the emails started, and nothing happened until mid-late October.”

Others said that what the neighborhood had experienced was a situation that fell through the cracks, and questioned if the protocol could deal with criminal activity at encampment sites. “To me, I don’t hear any policy, outside of drug use,” one meeting attendee said. “It would be okay to have the tents and bicycles and chairs. All that was fine for three or four months and really the catalyst to change this was the drug exchange captured on film.”

Other residents of the block said they had not felt harassed and asked if the primary reason for removing the tent was dealing marijuana. “I guess for me, it’s not really about that,” said another attendee. “It’s about having humanity for these people who are there, and if they’re using marijuana and they’re taking up the sidewalk, I don’t understand why it has to be so harsh and why so many people are so upset about it.”

Klein clarified that while possession of minimal amounts of marijuana is permitted, it cannot be smoked in public. It is illegal to distribute any type of drug in the District, he said.

Ivan Frishberg said the case pointed to a certain level of miscommunication, lack of coordination and follow-up between District agencies that led to unnecessary delays. “How do we get to a better system of communication so that this gets done quickly? It feels like there was a total lack of communication,” Frishberg. He said that he had reached out to the EOM, DCRA and DDOT and received no reply.

“Mostly, we just need you all to co-ordinate amongst each other to more efficiently address this stuff, otherwise you get to a meeting like this two months later where people are just pissed off—and legitimately so.”

Commissioner Sroufe said that communication with the public would have made the biggest difference. “I shared everyone’s frustration with what looked like nothing happening for a long time,” Sroufe said. “What I’ve discovered subsequently is that there was a lot happening,” Sroufe said, noting the work of DMHHS, MPD and Allen’s office. “So, there was a lot going on that we didn’t see. If I personally had known more about that, I wouldn’t have been as frustrated.”

Smith notes that while the tent was believed to be an encampment on public space, actions by DMHHS were dictated by law and protocol, a situation that changed when it was discovered the space was owned by CVS.

She emphasized that this case, where criminal activity was taking place in what appeared to be a homeless encampment, was extremely rare. “We shouldn’t assume that all folks that are staying in encampments are using homelessness as a front for engaging in criminal activity,” she said, adding that the criminal activity usually observed is often related to a lack of shelter, such as public urination.

Balancing the Needs of All

Ward 6 Councilmember Charles Allen (D) agreed that in a case where the people are reporting possible illegal behavior, the city needs to move more quickly than it did. He said that like many of the neighbors, he was frustrated. “There was a lot going on, on the part of District agencies, but we couldn’t tell from without,” he said. “I do think without a question that the city needs to do a better job communicating, both between agencies and also with the public.”

Allen said that he wanted to be clear. “We don’t want MPD to be the face of our homeless encampment outreach. That to me means we need our agencies to have better partnerships with MPD when the need to take action in a unique case like this.”

Still, Allen said that city is capable of balancing the needs of all District residents, noting that the Mayor’s Office is revising the encampment protocols to better address a variety of situations. He said that residents tell him they want the city to help people find stable, permanent housing. People also have an expectation, he added, that they can walk down sidewalks safely. “For me, it’s an ‘and’ not an ‘or’, we’ve got to do both,” he said. “They don’t have to be mutually exclusive.”

For Smith, finding the way to balance those two needs is ‘the million-dollar question’. “That’s what we’re tasked with doing,” she said, “to address the health and safety concerns of those in encampments and the wider community in a safe and equitably manner, and to ensure our DC values are represented so we are not criminalizing homelessness.” 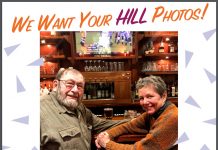