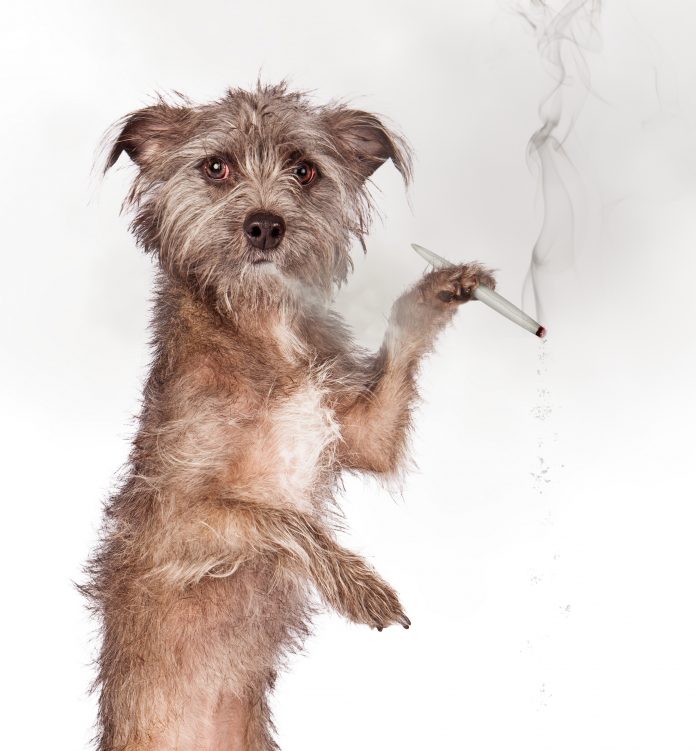 Veterinary medicine is not static and as time goes on, we are presented with new challenges. Twenty years ago, a cannabis intoxication was rare to encounter, but as laws and societal perceptions have changed, such toxicities are becoming increasingly common. At present thirty-three states and the District currently have passed laws broadly legalizing marijuana in some form, while most others allow its medical use under certain circumstances. This has led to marijuana becoming much more widespread.

Marijuana contains many compounds, including cannabidiol (CBD) and tetrahydrocannabinol (THC). THC is responsible for most of marijuana’s mind-altering effects and is toxic to dogs and cats, whereas CBD is becoming more commonly used to treat dogs with anxiety, arthritis, seizures, inflammation, and other health ailments. Safely used, CBD should not have any significant negative impacts upon a dog or cat’s health. It is important to not confuse CBD with marijuana or products that contain both CBD and THC. If using CBD products, be certain of the ingredients, quality, use, and purity. Dogs will not become ‘high’ on only CBD.

The past few years we have seen a number of dogs who have, or are suspected of ingesting cannabis (Cannabis sativa), either from raw product or from vape pens, edibles, etc. The first case I saw was in 1998, in New Jersey, but the numbers have increased rapidly in recent years. In some of the newer cases, clients know that their dog ate the product, but in others, ingestion was never seen. Unseen ingestion in a household that does not carry THC products has been observed to occur outside on the street – the dog ate the remains of a blunt tossed on the sidewalk. Sadly, people indiscriminately tossing their butts on the street have caused a moderate health crisis.

Dogs and cats seem to be attracted to the smell of marijuana, and being a small furry creature, they have no sense of portion control and will ingest whatever is in front of them. Weed in edibles only enhances the chances it will be eaten. Inhalation toxicity is uncommon, but possible, therefore care should be taken when smoking around pets.

Mild cases of toxicity manifest with lethargy, confusion, barking indiscriminately or making unusual vocalizations (aka – being high), dilated pupils, altered responses to stimulation, redness of the whites of the eyes, and overall acting abnormally. In more severe intoxication, the pet may not be able to walk, seems drunk on their feet, has a slow heart rate, vomits excessively, drools, and/or  is unable to hold urine. Coma and death are possible. About 25% of dogs will show excitement and stimulation with an increased heart rate instead of depression. Such clinical signs can be seen anywhere from minutes to hours post ingestion and may last for hours to days.

The majority of cases I have treated presented with multiple clinical signs, leading to the top differential diagnosis of cannabis consumption. The diagnosis, however, may not necessarily be confirmed by the owner, who may be completely unaware that a pet was exposed to the drug.

It is important that a diagnosis be obtained, as many other toxins, medications, and disease can mimic the signs of marijuana intoxication. When asked about potential ingestion, it is important that clients be honest with their veterinarian regarding their potential knowledge of cannabis ingestion. Having seen a number of cases of marijuana toxicity, with proper treatment, I feel confident that patients will make a full recovery with no lingering effects.

Treatment requires supportive care, baseline bloodwork to evaluate the liver and kidneys (and to rule out other problems), possibly abdominal X-rays to assess for any other ingested objects. In cases where the ingestion was within a few hours, emesis (vomiting) may be induced to try and clear the stomach of the toxic material. Once vomiting is under control, activated charcoal is administered to absorb as much of the toxin as possible. The charcoal also speeds up the intestines, decreasing the amount of time the toxins are inside the pet. Patients showing more clinical signs are hospitalized, intravenous fluids are given, sedation administered in certain cases, temperature supports, antacids, anti-nausea medications, and other supportive care. Once neurologically normal and able to walk and keep down food, the pet is usually released from the hospital.

Marijuana intoxication looks scary and is becoming ever more prevalent. With prompt and proper care, the dog or cat will usually make a full recovery. Remember that the best way to prevent intoxication is to take care to secure such substances in the home and to monitor what your pet ingests outside of the home.

Medical Marijuana: Not Just for Cancer

Old Pets Can Get Dementia Too