Little Women
This classic American novel by Louisa May Alcott has been filmed numerous times, but this version brings us a dazzling new production adapted for the screen and directed by Greta Gerwig, fast becoming one of our finest filmmakers (out at Christmas, the film is rated “PG” and runs 134 mins.).

Gerwig’s “Little Women” traces the familiar story of the beloved March sisters of Concord but does it with such polish and punch that she makes it new. She plays with the narrative, beginning her story with wannabe writer Jo (Soairse Ronan), already in New York trying to write for a living.  That big city experience is returned to often in the film, but early on Gerwig flashes back seven years to the March household during the Civil War, with the father gone and Marmee (Laura Dern) trying to keep home and hearth together.

The story needs no summary here; suffice it to say Gerwig incorporates most of the book’s plot lines. While spunky Ronan is the protagonist here, all the other sisters get their due: modest Meg (Emma Watson), sickly Beth (Eliza Sun), and feisty Amy (Florence Pugh).  The latter is a revelation, Pugh offering a spirited portrait that comes off more impactful than the shallower character of the novel.

The males of the cast perform uniformly well, especially Timothee Chalamet as Laurie,  in a mix of charm and lassitude. Louis Garrel adds a touch of European gravitas as Friedrich, Jo’s squeeze, and Tracey Letts gives a great cameo as Dashwood, Jo’s grumpy editor.

This “Little Women” is a thoroughly rich conception of the novel, re-imagined, but not too much, and adorned with splendid costuming, outstanding production design, bracing storytelling, and evocative music (hinting of Mahler’s symphonies) by Alexandre  Desplat. And Greta Gerwig has brought this all together in a completely up-to-date and convincing spangle of a holiday treat.

1917
The year has seen two extraordinary films featuring British infantryman in World War II.  In January, Peter Jackson unveiled “They Shall Not Grow Old,” a masterpiece of silent footage revivified with modern cinematic techniques. Now comes director Sam Mendes’ thrilling story of two English soldiers trying to send a warning to units headed into a German ambush.  While the documentary treated the infantry symbolically, the new film is a “tick-tock” thriller, focusing on single infantrymen fighting against resolute time and twisted geography to save their comrades (this film, released on Christmas, runs 118 minutes and is rated “R”).

“1917” opens with Lance Corporals Schofield (George MacKay) and Blake (Dean-Charles Chapman) getting ominous orders from an apprehensive general (Colin Firth). Their mission requires them to traverse a sector of French no man’s land—presumed abandoned by the Germans—to eventually reach a British battalion and get a planned offensive called off.  They cover treacherous territory rife with sniper fire, wayward aircraft, river rapids, and enemy redoubts, along with sudden death. What follows is an intense, riveting journey to the finish.

Mendes, recently known for Bond movies, here uses ample production resources to mount a movie massive in scale but highly personal at its core. The acting, led by the heroic MacKay, is lovingly understated in the best Brit way. The production is enhanced by brilliant photography from the great Roger Deakins and a stirring score by Thomas Newman. There could hardly be a Stiffer Upper Lip.

Bombshell
Based on the 2016 personnel dust-up at Fox News, “Bombshell” looked to be, from trailers, a satiric comedy; instead, it’s a surprisingly sober, yet thoroughly entertaining, snapshot of the unit created by Roger Ailes and featuring leggy blondes (which Ailes favored) and their struggles for and with success at Fox. Luckily for the film, it has the talents of Charlize Theron (as anchor Megyn Kelly), Nicole Kidman (as TV host Gretchen Carlson), and Margot Robbie (as a composite associate producer named Layla Pospisil) to sustain it (now in theaters, the film is rated “R” and runs 108 mins.).

The three actresses are the reason to see this movie which, smartly written by Charles Randolph and directed by veteran Jay Roach, keeps a brisk pace throughout.

Kidman, as Carlson, who got the legal ball rolling against Ailes, has the thinnest role, but the actress nails it with a mien of quiet confidence, knowing she can outwit her leadership and proving a model for her news mates.

Robbie beautifully plays a naïve newbie, desperately anxious to get ahead. She learns, all too palpably, what it might take to succeed when she is called in to an interview with Ailes (John Lithgow). Overall, her lack of guile morphs delicately into a “woke” woman newly aware of what advancement in her business can cost.

Theron as Megyn Kelly seals the deal. She personifies the brilliant and skeptical Kelly, a lawyer/journalist who knows her value but still has to fight for basic respect. It is her turn away from Ailes that finally earns him his fate. From her tart opening as the film’s narrator to her final triumph of leaving the network, Theron is vibrant and compelling. It doesn’t hurt that she really looks like Kelly and even channels the anchor’s mezzo voice.

Richard Jewell
Clint Eastwood’s true-life drama examines Richard Jewell, the man implicated in Atlanta’s Centennial Park bombing during the 1996 Olympics.  In steady, docudrama style, it depicts the incident, which took place at a music festival, during which Jewell, as a security guard, warns attendees about a suspicious package.  Though hailed as a hero, he soon becomes the bombing suspect, a theory pushed both by the local FBI office and the city’s most prominent newspaper.  While the film has its pluses–some fine support work by Kathy Bates (as his mom) and Sam Rockwell (as his lawyer)–the touchstone of the movie is Paul Warner Hauser as Jewell (the film is rated “R” and runs 129 minutes).

Rare enough that a chubby, mildly creepy protagonist dominates a Hollywood film, but Hauser captures fully the complex nature of a diffident, unexceptional man who is obsessed with “law enforcement.” Though knowledgeable about police procedures and security practices, he is almost cravenly deferential to authority.  This deference, plus his “security” knowledge makes him an easy mark for an anxious FBI team (headed by Jon Hamm) looking for a patsy. Hauser pulls off this balancing act in a performance of pure naturalism, making the viewer believe that, yes, he really is a creep–and also a victim.  Hauser, who has had a solid career as a featured player (“BlackkKlanman,” “I, Tonya”)  in recent years, gets the role of a lifetime and comes up golden. 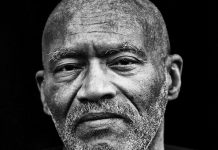 Star and Shamrock to Close Mid-February