Our beloved World Champion Nationals have departed for the season, but their Navy Yard neighborhood is anything but quiet. A recent arrival near Nats Park is ABC Pony, a ’80s- and ’90s-themed fast-casual noodle house. Named for a child’s toy, the 99-seat ABC Pony is located in the ground level of the NOVEL South Capitol Residences at the corner of I and South Capitol streets SE. The sunny space opens into NOVEL’s sumptuous lobby.

“When I opened Toki Underground (Atlas District) in 2011, I thought every neighborhood should have a great noodle shop,” local chef Erik Bruner-Yang explained. “Since then, noodle shops have evolved… and then this location became available.”

The modest newcomer resembles a coffee shop, but the food is gourmet, four-star quality. After ordering (and paying) at the counter, we perched at the bar and awaited our lunch. Husband Peter loves anchovies, so we decided to order “anchovy of the day,” a delicious boquerone (marinated white anchovy) from Spain. The tasty little fishes were presented in a custom-made cherry wooden plate, designed to represent a cassette holder. Other “snacks” were olives, prosciutto and baby red tomatoes.

Egg-drop soup (an Asian riff on Italian stracciatella) was swimming with noodles, celery root, pecorino Romano and circles of jalapeno. Filipino-style lumpia (crisp-skinned egg rolls) were filled with nicely seasoned ground pork and escorted by spicy tomato sauce. But the star of the show was fusilli (corkscrew pasta), napped with “white Bolognese” (garlicy butter and olive oil), and crowned with soppresata, similar to prosciutto. I could have licked the bowl. Entrees arrive with crusty bread, baked by local Bread Furst, and resting on top of a puddle of olive oil for dipping.

Since ABC Pony serves breakfast, there’s a nice selection of coffees and teas. The cocktail list offers innovative concoctions which change regularly, plus brief but interesting beer and wine lists.

You no longer have to fly to Cairo to experience the exotic—and healthy—cuisine of Egypt. Fava Pot, an offshoot of a popular food truck, opened late last year in Union Market. Almost seven years ago, chef/owner Dina Daniel started out with an Arlington-based food truck. In 2018, she unveiled a brick-and-mortar restaurant in Falls Church.

When Daniel left Egypt in 2004, she arrived with memories and recipes from her homeland. Back then few—if any—local restaurants served this Middle Eastern cuisine. Her menu focuses on Egyptian street food like falafel, stuffed grape leaves, fava bean sandwiches, dips and spreads. The signature koshary bowl combines lentils, rice, pasta, and a rich spicy tomato sauce topped with chickpeas and caramelized onions. Other comfort foods include gollash (Egyptian-style beef pie) and pasta baked with béchamel sauce. Many dishes are vegetarian.

Fava Pot sources high-quality local ingredients, including antibiotic-free and grass-fed chicken and game hens. Falafel is made entirely from scratch – no powders or premade dough–and fava beans are slow-cooked for 12 hours. Their motto: “Eat healthy for a good cause.” Fava Pot donates a portion of its proceeds to Egyptian orphans in need. Located inside Union Market at 1309 Fifth St. NE, Fava Bowl is open Tuesday through Sunday from 11 a.m. to 7 p.m. For more information visit www.favapot.com.

Whaley’s, the seafood centric-restaurant at 301 Water St. SE, closed late last year. Known for its elaborate seafood towers, Whaley’s had been in business three and a half years…. And after nearly two years of threading Japanese-style chicken onto skewers at 2214 Rhode Island Ave. NE, Momo Yakitori folded late last month. According to proprietor Andrew Chiou, the Woodridge space will continue to host private events, pop-ups and catering services.  (His lease runs through the end of 2020, and he’s reportedly working with brokers to land a new location). 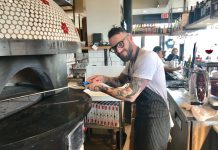