Early in December, Casey Trees and Montgomery County Parks co-sponsored a one-day conference called the Green Cities Summit. It was held on the beautiful Gallaudet Campus at the Kellogg Conference Center, just steps away from Olmsted Green. Over 300 tree experts, including arborists, researchers, landscape designers and architects and park and arbor staff joined to contemplate what the future holds for our area’s trees.

Climate change has often seemed like something happening in the future and far away. But, here on the Hill, it is hard to escape the message that climate change is a “here and now” crisis. We hear it from Jane Fonda and others with their weekly protests on the Capitol grounds. We also see it in graffiti-like posters of Greta Thunberg, the young Swedish climate activist.

As speaker after speaker at the summit emphasized, now is the time to be preparing for the future in our tree selections and city planning.

“Climate change is happening already to our trees,” said Max Paschall, one of the speakers. He is the founder of Shelterwood Forest Farm in the Appalachian foothills of eastern Pennsylvania. He has been studying the effects of climate on tree growth in Philadelphia, and predicts that by 2024 our area will begin to see a vastly different tree landscape to accommodate more warm and humid days and a yo-yo cycle of wet and dry weather.

Why Should We Care?

Recently, the Trust for Public Lands evaluated park access and quality in America’s 100 largest cities. Washington ranked first, and the trust noted that 98% of DC residents live within a 10-minute walk to a park. The national average is only 54%.

Trees affect our lives in so many ways. They add beauty and shade and provide habitat for wildlife that is vital for sustaining crops and flowers. Trees also increase the economic value of homes on the Hill. According to the Arbor Day Foundation, the presence of trees in a home’s yard increases financial value by up to 15%. The health benefits of having trees near are also well documented.

Another important function of trees is to absorb pollutants. One mature tree absorbs 120 to 240 pounds of pollutants per year. Two healthy trees supply the oxygen needs of one person for an entire year. (On average, we each consume about 386 pounds of oxygen a year.)

By planting trees along streets, alleyways and front yards, we can have a huge impact on our carbon dioxide exchange and help neutralize the change.

For homeowners, just like city planners and arborists, it is time to think about planting for the future, especially when it comes to trees that take time to establish themselves. Earl Eutsler, associate director/state forester of the Urban Forestry Division of the District Department of Transportation (DDOT), says that his division plants 8,000 new trees a year, with “a wide and diverse assortment of species, to better protect from future impacts related to climate as well as new pests and diseases.”

Our area is already seeing new threats to oak trees, which grace Capitol Hill’s parks and tree boxes. The oak ambrosia beetle has been recently spotted in DC. It attacks stressed, dying or dead trees, but arborists also report seeing perfectly healthy mature trees being devastated in a period of weeks.

The ambrosia beetle was accidentally imported to the United States in peach trees in North Carolina that had arrived from China in 1974. A dusting of white powder at the base of a tree is a telltale sign of beetle damage. The APHIS survey of the US Department of Agriculture is reporting a higher relative risk along the Atlantic seaboard. The staff of Davey’s Tree Service, a Hill firm, believes an increase in the oak wilt fungus is also a cause of the recent epidemic hitting oak trees. To catch the disease early, look for signs of leaves closing in or looking thirsty, or brown spots on the leaves.

In 2017, the National Park Service closed Theodore Roosevelt Island for a number of days to remove white ash trees that had been attacked by the emerald ash borer beetle. This beetle has been in the DC area over the past 10 years, and about 25% of the white ash trees have been killed and removed.

As the world warms, our trees will confront new threats, making it important to stay educated and alert. Casey Trees, the DC Urban Forestry Division and the US Forest Service are all excellent resources.

Think Trees of the South

A number of presenters at the Green Cities Summit said that when we plant new trees, we should be thinking about planting them from the deep South, including cities like New Orleans. Trees already popular on Capitol Hill, like sugar gum, hollies and magnolias, have great track records in the South. Other tree breeds being recommended include poplar hybrids and empress trees.

Eutsler reports that the city has had good success planting several resilient species: Shumard oak, overcup oak, black gum, American hornbeam and yellowwood. They thrive in hotter and drier areas found in the South, zones 8 and 9. He also notes that the trees are under-represented in our area, and planting them adds to species diversity.

We all can help make our neighborhood and city greener by doing a little research before we plant new trees. Check out a tree’s growing zone and heat zone. See if it is resilient in the face of extreme weather and examine how it thrives in the South. By planting trees and making wise choices about what to plant, we are securing the future of our tree landscape.

Rindy O’Brien loves trees and appreciates the thoughtful research gathered by Casey Trees to help our tree inventories. Contact her at rindyobrien@gmail.com. 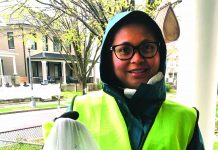 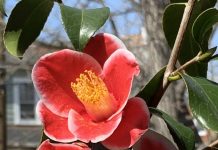 Camelia, A Star for the Spring Garden 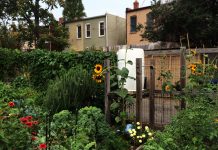