This year is the 250th anniversary of the birth of Ludwig Van Beethoven. And, there was no better way of commencing a celebration of this genius than to listen to violinist Midori and pianist Jean-Yves Thibaudet perform Sonata No. 2 in A Major, Op. 12, No. 2; Sonata No. 3 in E-flat Major, Op. 12, No. 3 and the fiendish Sonata No. 9 in A Major, Op.47 “Kreutzer.” The concert was presented by Washington Performing Arts at the wonderful Strathmore Center for the Performing Arts.

The two are not noted for their recorded interpretations of Beethoven. Midori, mistress of her Guarneri, has received well earn accolades for recording Paganini’s devilishly difficult 24 Caprices. A personal favorite are her interpretations of Bach’s Partitas and Sonatas for solo violin. These pieces require intense concentration and tremendous emotional range, all of which she delivers. Generally, Midori has chosen to live well within the confines of main classical canon performing mainly as a soloist in the concerto genre.

Thibaudet, on the other, ranges much farther in his recorded work. Known for his interpretations of Ravel’s solo piano works, which earned him a Grammy nomination, he has accompanied musicians as varied as Celia Bartoli and Renee Fleming. Thibaudet also has an interest in popular music in general and jazz in particular. His album of Bill Evan’s compositions earned him particular notice.

Sonatas are really musical conversations between two artists. Melodies are traded back and forth. Timing is critical. There is no room for error in the absence of a large orchestra. Truly they are performances without a net.

Midori and Thibaudet proved a deft pair. Artfully dressed in a lovely silk floor length ensemble, Midori stood in contrast to her more soberly suited partner. Standing next to the piano, she let the music absorb her, swaying and weaving as her bow danced artfully over the strings. Thibaudet, for his part, matched her note for note as they exchanged the lead melodic role, his hands a blur over the ivories.

The performance commenced with Sonata No. 2. Dedicated to Antonio Salieri, Beethoven’s voice instructor, the piece is almost a dance between piano and violin. Both performers leavened what is a fairly simple score with their command of tone and the delicacy of their notes. The beginning of the Sonata No. 3, on the other hand, is dominated by it piano. Here, Thibaudet demonstrated his true command of the keyboard. His fingers flashing, arms occasionally crossing in some passages with Midori a supportive echo. Over the course of the second movement, the violin’s role increased until both it and the piano united at the end.

The two then turned their attention to Beethoven’s Sonata No. 9 in A Major, No. 47. Known as the “Kreutzer,” here the composer departs from the forms inherited from Hadyn and Mozart, striking out in a new direction. Opening slowly with the violin, later echoed by the piano, the momentum builds as a fiendishly complicated set of melodies that tax the deftest of musicians vibrantly unspools. Both Midori and Thibaudet rose to the occasion navigating Beethoven’s compositional challenge with grace and fluidity. The fiery finale of the third movement left the audience absolutely breathless. They rewarded the visibly drained musicians with successive ovations.

Do not miss the remainder of the Washington Performing Arts season. Among this author’s recommendations are an all-Beethoven program by the incomparable violinist Anne-Sophie Mutter and pianist  Lambert Orkis on Feb. 1, which incidentally includes the “Kreutzer” Sonata; Grammy winning, pianist Daniil Trifonov on March 4 performing Bach; the innovative Kronos Quartet on March 13; an all-Beethoven concert by Emanuel Ax on May 6; and a personal favorite, pianist Igor Levit performing four Beethoven sonatas on May 15. These are only a few of the superb performances brought to the area by WPA. 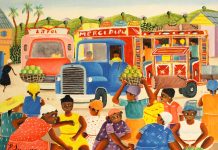