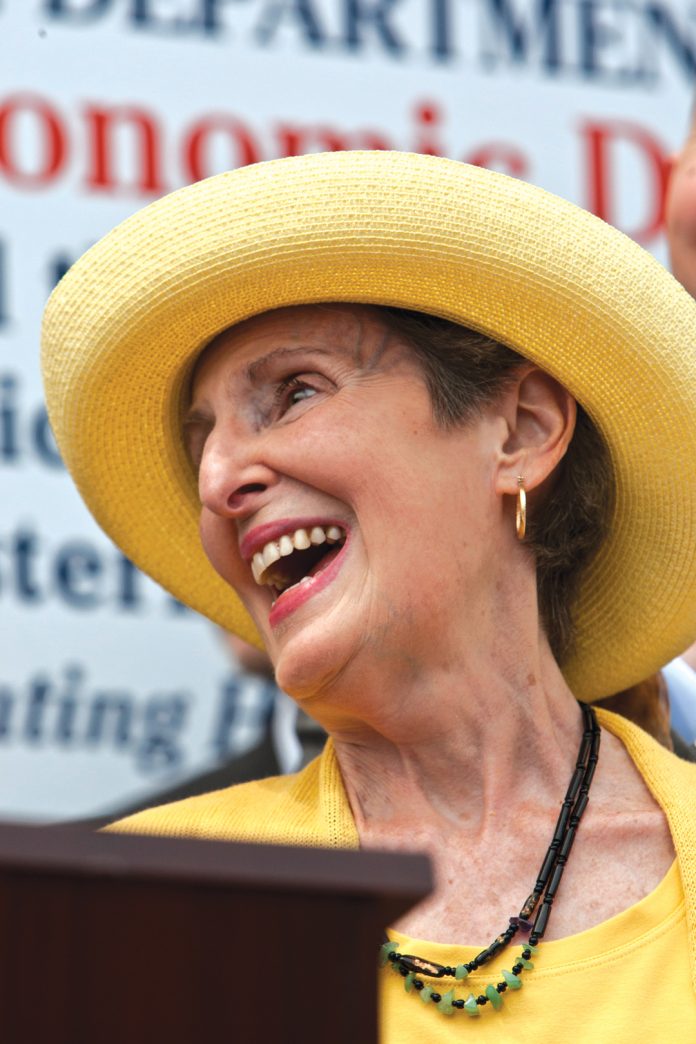 February’s Woman of Ward 6 is Sharon Ambrose, a no-nonsense proponent of economic development projects, such as the construction of Nationals Park, when she served as Ward 6’s Council member for ten years.

The Ward 6 Democrats are recognizing and honoring Ward 6 women who have made significant contributions to better our community for the 2020 anniversary of the 19th Amendment.

Ambrose was a 50-year resident of Capitol Hill and she fashioned herself as an all-American, “baked potato” politician in the tumultuous final years of “Mayor for Life” Marion Barry’s tenure at City Hall.

When she first took office as Ward 6’s Councilmember in 1997, the city was struggling back from insolvency, its financial management overseen by a federally appointed control board that – until it was disbanded in 2001 – exercised more power than the city council.

She rose to become head of the council’s committee on economic development, opposing projects she saw as unreasonably expensive, while successfully pressing for a range of major developments in Ward 6. She helped spearhead new restaurant and business development near the Navy Yard and Eastern market and successfully lobbied for the Washington Nationals to locate their ballpark in a formerly industrial section of the waterfront. She was instrumental in passing legislation that established a governing structure and secured dollars in the budget for Eastern Market.

At her retirement, the Washington Post’s editorial board wrote that “The city made its way back from fiscal ruin during her service.” She “helped put an end to the image of the DC Council as a refuge for small-bore politicians given to going off half-cocked on marginal issues.”

Sharon Connelly was born in Chicago on Sept. 3, 1939. The eldest of three, she grew up in the Irish neighborhood of Englewood. “In our house,” her brother Terry Connelly said in the Washington Post, “the order of respect was God, the Pope, the Cardinal and Mayor Dick Daley.”

She graduated in 1961 from what was then Saint Xavier College, a Catholic women’s school in Chicago, with a bachelor’s degree in English. She moved to the DC area four years later with her husband Michael Ambrose.

Soon after moving to Capitol Hill, she and her husband became concerned with neighborhood issues, including gentrification. She became involved in her children’s new schools and was involved in founding the Capitol Hill Arts Workshop. She was a teacher and a PTA leader before working as an aide to Democratic council members Betty Ann Kane and John Ray.

“I think the first political experience I ever had was campaigning with my grandfather, door to door, for Adlai Stevenson,” she said in a 2013 interview for the Ruth Ann Overbeck Capitol Hill History Project.

Council Chair Phil Mendelson, described her as “one of the best councilmembers, if not the best. She knew how to thread the needle on difficult issues. She was both compromising and uncompressing, recognizing the value of reaching a solution, but holding then firm to her positions.” He told the Hill Rag, “I learned from her example.”

“The Ward 6 that we see today is the fruition of all of Sharon Ambrose’s painstaking work,” said former ANC Commissioner Ken Jarboe.

About the initiative: The Women of Ward 6 Initiative is a non-profit recognition of Ward 6’s women. The initiative, in partnership with the National Woman’s Party, Capitol Hill Restoration Society and the Hill Rag will culminate in the 2020 100th anniversary of the ratification of the 19th Amendment, which gave women the right to vote.

Marci Hilt is a retired communications coordinator and press secretary at the U.S. Department of Agriculture and the Office of the U.S. Trade Representative. She currently writes and edits EMMCA MATTERS and is treasurer of the Ward 6 Democrats.