Mar. 27, 2:28 p.m.: This story has been updated to reflect information received from the National Park Service (NPS)

As people are encouraged to avoid public gatherings of ten or more, most public park facilities are closed.

However, the park grounds themselves on most are open for public use as of right now, an NPS spokesperson confirmed via telephone, including fields and trails. “We encourage everyone who goes there to follow guidance from CDC (Center for Disease Control) and local officials,” added the spokesperson. That guidance includes staying 6 feet away from other park users, avoiding large groups, frequent hand washing, covering your mouth when you cough, and of course, not going outside if you are sick.

The spokesperson said that NPS was in the process of removing signs that appear to indicate that parks are entirely closed to the public. One appeared on a bulletin board in Lincoln Park on Friday morning. ‘As a public health precaution,’ it read, ‘Lincoln Park is temporarily closed for the safety of staff and visitors.’

Signs saying the Lincoln Park playgrounds were closed had appeared as early as last weekend. The playgrounds remain closed and so signs will stay in place.

However, the status of each individual parks will vary, the spokesperson said. For instance, the grounds and trails of Kenilworth Aquatic Gardens are closed, according to the park’s website.

You can find the status of each park by finding it on the map at www.nps.gov/locations/dc/parks. Click on the name of the park to get information relevant to each site.

District parks and playgrounds run by the Department of Parks and Recreation (DC DPR) as well as in the portfolio of DC Public Schools (DCPS), including playgrounds but also basketball courts, soccer fields and baseball fields are closed.

Many other places where people congregate outside have also announced closures in order to help slow the spread of the virus. Congressional Cemetery announced that they would close to the public as of the evening of March 25. In Southwest, both Yards Park and Canal Park were Close to comply with the Mayor’s directive, the Capitol Riverfront BID confirmed.

At her Friday press conference, Mayor Muriel Bowser said that she was reassigning security personnel generally employed at DCPS schools to enforce the District prohibition against gatherings of ten people or more at District facilities, including pick-up games of sports such as soccer and basketball.

First District Commander Morgan Kane said that, in the interest of public safety, police would be dispersing groups of ten or more people congregating in District parks.

Bowser said at an earlier press conference announcing the closure of the Tidal Basin that authorities would ask congregations of people to ‘move along’.

Bowser said that people are encouraged to take walks and engage in recreation with members of their immediate family, so long as they maintain social distance from other individuals and groups on sidewalks and in open areas.

The Hill Rag has reached out to NPS for comments on park closures and enforcement. This story will be updated when information is received.

Get updates on NPS Response to COVID-19 at www.nps.gov/aboutus/news/public-health-update 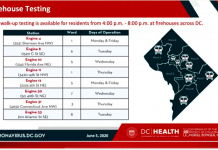 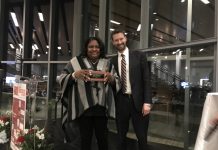